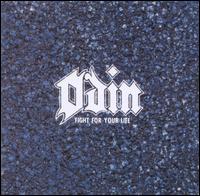 Review:
This California quartet really knows how to rock! Songs like “12 O’Clock High”, “Love Action”, “Modern Day King”, “I’m Gonna Get You” and “Fight For Your Life” really kick ass! There is also a nice instrumental called “Serenade To The Court”. Their sound is reminiscent of the early 80’s Sunset Strip bands, with the soaring (and screeching) vocals of Randy O.

Odin appeared in “The Decline of Western Civilization Part 2: The Metal Years”, as the band that was being pushed by club owner Bill Gazzari. Unfortunately, Odin received nothing more then cult status in their heyday. The band occasionally reforms for shows, and Fight For Your Life receives two thumbs up.