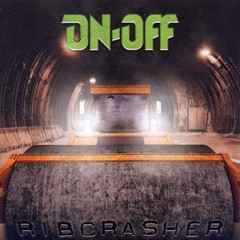 Review:
If you need proof of AC/DC‘s universal appeal and influence look no further than Italy’s On-Off. Forming way back in 1997 as an AC/DC tribute band, the guys have finally decided to release some original material — although there is no denying who their idols are.

Unlike Airbourne who use ample amounts of energy and attitude to convey their message, On-Off take a similar approach as Sideburn, basing their stripped-down songs around boot-stompin’ three-chord boogie. It results in a sound closer to Dirty Deeds Done Dirt Cheap than the heavier Back In Black, and makes for an entertaining and slightly laid-back debut album.

Albums like Ribcrasher are always based around the guitar riff, and this is no exception. With a steady beat the members of On-Off play blues inspired hard rock with conviction, laying down simple yet effective grooves that would make the Young brothers proud. The AC/DC sound is evident throughout but works especially well on the up-tempo “Nasty Rhythm”, the lead-footed “Com’on Baby”, the guitar driven “Seven” and the heavy “Steamroller Blues”. Wrapping up the entire affair is the addictive “Let Me Play My Stuff”, a song that could easily have been “Ain’t No Fun (Waiting Round To Be A Millionaire)” part two.

I wouldn’t mind seeing a bit more aggression in On-Off‘s music, but that really isn’t what this band is about. Instead they are a slightly more reserved version of the AC/DC clones, which isn’t bad at all… not everything can be played at a hundred miles per hour. The opening lyrics to the title track pretty much preview what you will be in for with Ribcrasher, “The drums pulse in my head, I’ve got shivers down my spine”. This CD isn’t innovative or fresh… but music like this doesn’t need to be.