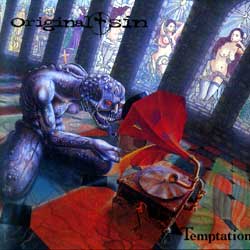 Review:
This is the debut disc from the talented quintet known as Original Sin. Songs such as “Bad Child”, “No Way Out” and “Locked Out” really rock. Plus there is also a very good instrumental called “Flight To Jupiter” and a cool cover of Black Sabbath‘s “Symptom Of The Universe”.

The band’s sound is a combination of Creed meets Skid Row. The band plays well throughout the album, and therefore they receive two thumbs up!