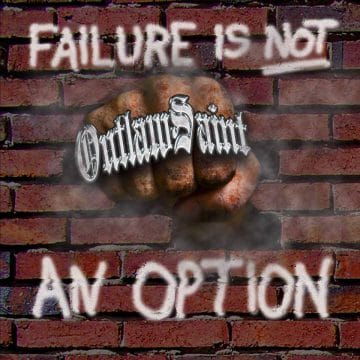 Review:
Minnesota rockers Outlaw Saint included the following message on their package to the Sleaze Roxx headquarters: “Please review immediately! Contains a “raw n’ raunchy” rock opera from Minnesota’s Own Raw n’ Raunchy Rock Band!” The first three words were capitalized on the package. Be careful what you wish for. I will review Outlaw Saint‘s album Failure Is Not A Option right away but mainly because unlike most albums that I review, I do not need to listen to it many times over before rendering an opinion. This is an easy one to review after one listen. There is no way to sugarcoat it. This is awful stuff!

I was wary when I first looked at the back of the CD case since there were 17 listed songs. Most bands have a hard time coming up with two or three truly memorable songs, let alone a full EP or album of outstanding tracks. How was this unknown (to me) Minnesota rock band going to have 17 truly memorable songs on what I assume is its debut album. As it turns out, many of the “tracks” are actually narrated by the various characters in the raw n’ raunchy rock opera / story so there are actually only 12 songs rather than 17. It’s hard to make out the exact story from the songs and narrative offered on the album. Luckily, the back of the CD indicates that Outlaw Saint‘s opera is based on a true story consisting of die hard rocker Quentin King‘s unbreakable dedication to music being put to the ultimate test. Will Quentin King find his true calling in life given the following obstacles — falling in and out of love while facing divorce, depression, heartbreak and a host of insurmountable odds?

The story is actually a little dull or ordinary. After all, 50% of marriages end up in divorce or separation in the United States of America. So whether divorce happens due to someone pursuing their music dream or whatever else, it’s not like this is that big of a deal. During the narrated track “I Got That Job”, the female advises the male (Quentin) that she found a job two hours away and that she decided to take it without even consulting him about it. Again, it seems that the relationship just wasn’t that strong if one partner is willing to make such a life altering change without even consulting his/her partner. I am also not sure how that figures in the story of the die hard rocker not being able to pursue his musical dream. What I am getting at is that the story around which the rock opera is based on appears to be a rather generic and at times aimless one. In some ways, it reminds me a bit of the story behind the movie Hair I Go Again with the characters Kyle Kruger and Steve McClure giving everything up for another shot at putting their rock n’ roll band together. I never reviewed the movie (I did review the “soundtrack” to the movie — Bullet In The Chamber‘s One Last Shot EP) but it was a rather dull affair with the only bright spots being what their former bandmates were up to and the various cameos from artists such as Ron Keel.

As I was listening to Outlaw Saint‘s album Failure Is Not An Option, all I could think was how unfair it was for professional and talented acts that Outlaw Saint are able to release a record and even get it reviewed by Sleaze Roxx. Odds are that there are many way better and much worthier albums that could use the exposure but I have spent a couple of hours now on a record that should have never seen the light of day. I wish that I could be more positive in this review but that’s just the way I feel about Outlaw Saint‘s album.

Outlaw Saint‘s “Back In The Fighting Form” video: