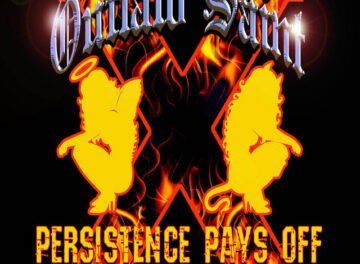 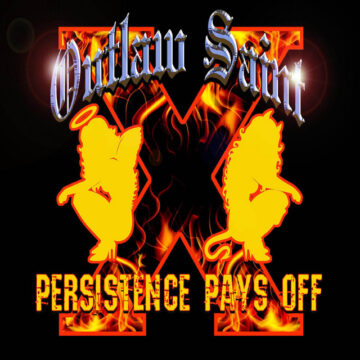 OUTLAW SAINT
PERSISTENCE PAYS OFF
Released on May 8, 2022 (Outlaw Saint)

Review:
It feels like just yesterday when I reviewed Outlaw Saint‘s previous album Failure Is Not An Option. It’s actually been about three and a half years since I reviewed that album but it’s a memorable one for me since the record was just so terrible. My very words to describe the album were as follows: “This is an easy one to review after one listen. There is no way to sugarcoat it. This is awful stuff!” Usually when I deliver a negative review — and that one was right up there with one of the worst reviews that I ever gave — I never hear from the band again but lo and behold, I was contacted by Outlaw Saint‘s new guitarist Johnny Outlaw who asked me to review the band’s latest album Persistence Pays Off.

I can’t say that I was excited to review Outlaw Saint‘s new album given that I noticed that although the band had seemingly gone through a major line-up overhaul, the arguably weakest link in the group was still there. Yes. Unfortunately, frontman Tank “Ain’t No Saint” Davidson was still handling the lead vocals. Funny enough, I had forgotten what I had written about Tank‘s singing aside that I knew that I had indicated something to the extent that it sucked. I am not going to sugarcoat things. In fact, while I was thinking of what to write after forcing myself to listen to Persistence Pays Off a couple of times, I had come up with this line “Tank‘s singing makes Anvil frontman Lips feel like a soprano singer.”

Obviously, Tank‘s singing hasn’t really improved to my ears since I stated the following in my review of Failure Is Not An Option: “Just like Demons Song of The End‘s second album, the “make it or break it” element to the songs is the singing or lack thereof. Tank‘s singing on Failure Is Not An Option makes Anvil frontman Lips sound like a bonafide powerhouse singer. In other words, Tank can’t sing and it’s painful having to listen to any of the tracks. It’s a shame because the music without the vocals is not bad for a good chunk of the time.” Those words were true back in May 2019 and are true once again in November 2022. Tank can’t sing. I can definitely feel the enthusiasm in his voice while listening to Persistence Pays Off but my ears can only take so much. For the first time that I can ever remember, it also feels like I can hear a singer seemingly taking breaths while singing. Shouldn’t that have been edited out?

In any case, I’ll try to focus on some positives. Unlike the previous album Failure Is Not An Option, Outlaw Saint are not offering an ill-conceived concept album with Persistence Pays Off, nor are they seemingly focusing on dull subjects such as someone having a divorce. You can feel some strong energy with the songs on Persistence Pays Off so that’s a plus. That’s about it for the positives. I would be curious to hear what the songs would have sounded like with a proper singer. Unfortunately, that’s most likely not going to happen since it looks like Outlaw Saint is Tank “Ain’t No Saint” Davidson‘s baby.

Overall, I continue to be disappointed with what I am hearing from Outlaw Saint. While I admire the passion and enthusiasm that can clearly be heard on their latest album, there is really nothing on it that makes me want to listen to it.