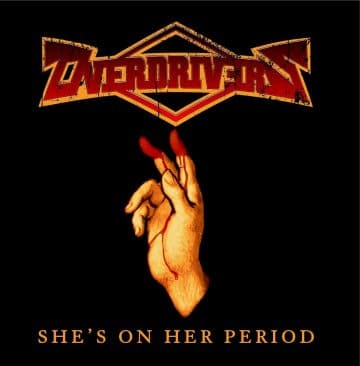 OVERDRIVERS
SHE’S ON HER PERIOD
Released on November 9, 2018 (Dooweet Agency)

Review:
Wow! What a fuckin’ record! My expectations were sky high for Overdrivers‘ new album She’s On Her Period and the band has delivered and then some! For those who are ardent Sleaze Roxx followers, you may recall that I posted about Overdrivers releasing their latest album earlier this month while mentioning on Facebook that I had only heard three songs and it had been a while since I had been so excited about a band that I discover for the first time. After hearing those three songs from Overdrivers, I immediately purchased both of their albums — She’s On Her Period (2018) and Rockin’ Hell (2016).

There’s no doubt that Overdrivers are borrowing heavily from Aussie rockers Airbourne. In fact, Overdrivers‘ speedier AC/DC fare is exactly the type of music that Airbourne play time and time again on their records. Do we need another Airbourne? You bet your ass we do! There are a couple of things that distinguish Overdrivers from Airbourne. First of all, Overdrivers‘ lead vocalist Adrien Desquirez has a different more Bon Scott like delivery than Airbourne‘s frontman Joel O’Keeffe. In fact, I can barely make out what Desquirez is singing but he does sound fantastic. Second of all, Overdrivers have included an instrumental song (“Bottoms Up”) on their album. I am still bewildered each time that I listen to the track, which has an almost Irish rock tinge to it. Third of all, Overdrivers are a tad more crass with their song titles and presumably lyrics than Airbourne. Song titles like “The Best Blowjob In History,” “Show Your Boobies” and the title track on She’s On Her Period are quite straightforward with their meaning. Aside from these slight differences, you’d be hard pressed not to think that you’re listening to Airbourne when listening to Overdrivers‘ album She’s On Her Period.

Is this the album of the year? I am not sure yet but it will be definitely going head to head with whichever albums that I have in mind for the top spot on the soon to be published Sleaze Roxx’s Top Ten Albums of 2018. If you love Airbourne like I do, you’re going to love Overdrivers as well!