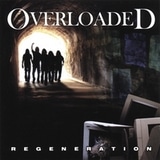 Production:
Recorded and engineered by Darren Trentacost and Tim Hicks.

Review:
Overloaded combine years of stage experience with a hard rocking sledgehammer approach to songwriting. Within this band I can hear traces of Trouble, Dangerous Toys, Kiss, L.A. Guns and Warrior Soul.

These guys have that elusive ‘hook’ that all bands strive for. The fact that they decided to release their material independently is a testament to the power and strength of this act. It is also a comment on the current recording industry’s crumbling infrastructure. Overloaded‘s music hits you like a category four hurricane just making landfall. There is no escape, you will be blown away.

Although I play the whole album at an extremely loud volume, my neighbors would tell you that one of my favorite tracks is “What’s In There”. I mean are you kidding me? This should be played on every hard rock station in the world. They got their chemistry right when they put this opening track down. I can imagine that Overloaded is a crowd favorite at the local watering hole.

The band sound like they are living the lifestyles they are singing about. “Flashy Girl”, with its Dangerous Toys style rap and the heavy Black Sabbath styled riff, is a great party song. “Presidents Day” is Trouble meets Skid Row…yes, it’s just that good.

Fans of good American hard rock/metal should get this album, as Buckcherry with melody comes to mind when spinning Regeneration. My only complaint is that I wanted to hear more of the guitarist just shredding things up. Overall though, Overloaded is high energy rock and roll just screaming to be played loud. Like a good Led Zeppelin album, every song, although similar, presents itself in a new and exciting light.