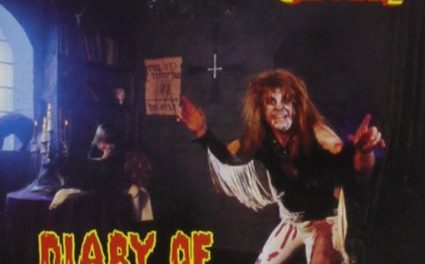 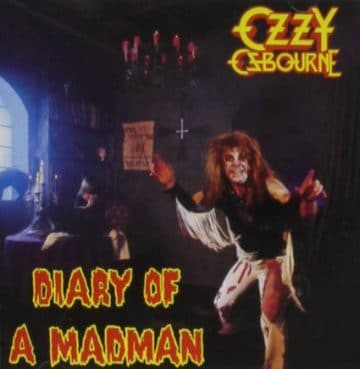 OZZY OSBOURNE
DIARY OF A MADMAN
Released on November 7, 1981 (Jet)

Review:
As I sit down to listen and review this release from 35 years ago, I am reminded of a talent that was taken far too early. Randy Rhoads, to this day, is still one of my favorite guitarists. His playing has influenced so many guitar players. In his short existence of 25 years, he accomplished so much in just two studio albums. I could go further and mention the two Japanese releases he did with Quiet Riot… But why, these are lessor known albums that for years have been hard to find and honestly, Rhoads playing had gotten so much better since those early Quiet Riot albums. There have been other compilations of Rhoads playing — Ozzy Osbourne’s Tribute and Quiet Riot’s The Randy Rhoads Years. Both good, but they do not live up to the creativity of a brilliant young musician who on the two Osbourne releases left an unforgettable legacy.

Ozzy Osbourne’s Diary Of A Madman — Just seeing the words on the page excites me. I recollect this being the first Ozzy Osbourne album that I ever purchased. For those who may have read my review of Yngwie Malmsteen’s Trilogy, I had touched on the fact that I would purchase the tapes/records I wanted to buy from the local Woolco department store. Not by choice, but out of necessity since I lived in a town that didn’t have a real record store. Surprisingly though, the selection was actually pretty decent. Diary Of A Madman was one of those purchases and remains my favorite Osbourne release.

“Over The Mountain” starts the album off with Rhoads playing a very tight up and down picking rhythm with intensity. The drums and bass follow and it is quickly apparent that I am aboard a musical freight train. Osbourne‘s vocals are truly remarkable and he profoundly executes like only Osbourne can, this making the opening track a true classic. The tightness that this unit plays with is undeniable. Bassist Bob Daisley and drummer Lee Kerslake are not your typical rhythm section. Listening to them underneath the beauty of Rhoads playing is like a wolf attacking his prey with precision and determination. This truly great song has many high points, but the highest being Rhoads‘ guitar solo. Of all the great work Rhoads did, this is to me the pinnacle of it.

“Flying High Again” is up next and begins with another classic guitar riff. “Oh no, here we go” proclaims Osbourne. The song is off and running. I always felt that the Blizzard of Ozz band had a great knack for bringing out the feeling of the lyrics through the music. With “Crazy Train” on the Blizzard Of Ozz album previously and with “Flying High Again”, this hard technique has been achieved. To me that says a lot in terms of great songwriting. If you can convey to the listener and create a mood, your goal as a writer has been attained. This is so well executed that it portrays Osbourne himself as almost in a chaotic state and you’re feeling his pain through the lyrics. And adding to this chaos, is the “Flying High Again” guitar solo itself. It is intense, yet very well articulated between both Rhoads and Daisley, where Daisley is underlying the guitar hammer-ons on the bass, which sounds very unique and different.

“You Can’t Kill Rock And Roll” slows things down briefly where Rhoads plays a melodic acoustic line throughout the verse. Rhoads‘ classical influence really shows throughout this track. The build-up to the chorus is genius. In my younger years, this was the song that I would listen to repeatedly. I was taken by Osbourne’s vocal approach, the catchy melody of the chorus and the simple lyrical content. This song has pure appeal to the listener. It suits Osbourne perfectly. With all the controversy that surrounded him back in those days, the message was clear to those opposed to what he did best. Rock N Roll will forever live on through song.

“Believer” starts with a great and moody bass line with Rhoads using guitar noises and harmonics to compliment Daisley’s coolness. The verse speeds things up with Rhoads chugging along to Osbourne’s cool vocal phrasings. A phasing noise can be heard throughout the whole song that gives the song an eerie, horror like feel.

“Little Dolls” is Kerslake’s time to shine. He starts “Little Dolls” with a rhythmic beat that has a very Native American feel to it. From that point, Rhoads comes in with yet another memorable guitar riff. Throughout the short chorus, Daisley can be heard on the bass emulating Kerslake’s powerful drum intro beat. Osbourne’s vocals are very dominating and pronounced amongst the three musicians providing his backing. On the section before the guitar solo, Osbourne’s vocal technique has a Beatlesque feel to it, which shows a different side of him vocally.

“Tonight” is another song that starts things off slowly. With some really great lyrics, “It only rains, when it pours” for example. But the softness would be short lived. Rhoads comes in on the chorus with crushing, distorted guitar chords that build the great chorus into a melodic masterpiece. Osbourne’s wallowing vocals make him sound desperate to the point where you almost feel sorry for him. As I have been rediscovering this album, this is a track that really stands out to me. It is an epic display of true songwriting and musicianship.

“S.A.T.O.” is one that sounds very reminiscent to “Steal Away The Night” from Blizzard Of Ozz. Some great riffing from Rhoads is provided. The feel of the song is very open and free. The guitar riff gives Kerslake and Daisley the opportunity to show some intricacy in their parts. Daisley can be heard using higher notes in many parts, running the coarse of the neck throughout.

“Diary Of A Madman” closes out the album and is another song of epic proportions. The guitar enters the song with a free spirited acoustic guitar part, then quickly switches as Rhoads acoustically develops the main guitar riff, at that point the electric guitar part simulates the main riff. Osbourne enters the picture after the musical interlude of sorts with the guitars toned back down to let his vocal breathe. The song really showcases Rhoads‘ guitar playing and his classical background yet again. There are many changes throughout with many emotions being exemplified. The repeated chorus like section has an orchestrated feel that bleeds into the ending section of the song. This outro features a very operatic voicing that doubles with Rhoads‘ guitar.

In writing this review and listening, it became very apparent that Max Norman, who engineered/produced the two first Ozzy solo albums, was very underrated. I have enjoyed much of his work throughout the years. Lynch Mob’s Wicked Sensation and Megadeth’s Youthanasia are two albums he did that come to mind. I’ve found that the clarity and volume levels in his work are impeccable. It’s funny because sometimes the producer doesn’t get the credit he may deserve. For an artist, getting down on tape and what you hear in your head could be two different things. I think on this album Norman truly achieves that on Diary Of A Madman.

Upon listening through headphones, so much more appears. To me it’s a contrast of many colors (instruments) formed together to make brilliance. It is easier to hear Rhoads‘ multi-tracks. The background vocals stand out more. The little intricacies are more predominant. So overall my feeling on this album is as it has always been… a true piece of artistic genius.

Speak Of The Devil Tour