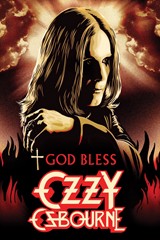 Review:
When I viewed God Bless Ozzy Osbourne back in August of this year I truly hoped that it was more than series of rehashed tales that I was already familiar with. After all, between Ozzy Osbourne‘s home video Don’t Blame Me, VH-1’s Behind The Music episode, countless books and the TV series The Osbournes, just how much more can you learn about the Prince Of Darkness? Howver, the fact that this film was produced by Ozzy‘s son Jack Osbourne had me skeptical that certain details would be omitted or glossed over.

God Bless Ozzy Osbourne features retread material with concert and backstage footage intertwined with interviews, but the DVD has a personal touch that might have not been present if done by someone outside of the Osbourne camp. The film focuses on the major events in Ozzy‘s life that shaped him into the person that he is today. God Bless Ozzy Osbourne doesn’t ignore the singer’s humble beginnings (he and his family were dirt poor) and Osbourne openly talks about his childhood — he was relatively content despite the financial struggles he and his family endured. Ozzy‘s father Jack was a hard-working man who worked at a foundry in Birmingham and instilled a strong work ethic in Ozzy — even putting away some money to buy Ozzy his first PA system. Later Ozzy had a run in with the law that landed him in prison for 6 months, but it was his interest in rock ‘n’ roll that saved him from a life of crime. Osbourne then met guitarist Tony Iommi, bassist Terry “Geezer” Butler and drummer Bill Ward through a newspaper ad and together formed Black Sabbath.

Black Sabbath are the architects of the subgenre we now call heavy metal — a feeling that is echoed in the film by former Black Flag singer Henry Rollins. Osbourne‘s drinking and drugging at the peak of Sabbath‘s success got him sacked from the band, and after circling the drain for the better part of a year Ozzy began his solo career with the help of manager Sharon Arden (whom Ozzy would later marry). Sharon paired Ozzy with guitar virtuoso Randy Rhoads and the pair recorded the debut album Blizzard Of Ozz and the follow-up Diary Of A Madman. There is a huge omission in this portion of the film as there is no mention of bassist Bob Daisley or drummer Lee Kerslake, who were crucial in the creation of these two albums which are still held in high regard by hard rock and metal fans to this day.

Osbourne suffered an enormous loss when Randy Rhoads died in a catastrophic plane stunt gone wrong. Ozzy coped with this traumatic loss by increasing his intake of drugs and alcohol, listening to him speak about this event you get the sense that it isn’t until now, some 30 years later, that he has grieved properly for his fallen comrade. Sobriety also allowed Osbourne to finally grieve for the loss of his rock, his father Jack, who he speaks fondly of.

With Rhoads‘ passing Osbourne moved forward with his solo career and reached new heights with guitarist Zakk Wylde, who co-wrote and recorded the blockbuster No More Tears album. At the turn of the century MTV pitched an idea for a ‘reality’ TV show — The Osbournes series ran from 2002-2005. The show depicted Ozzy as a dopey and sluggish, mush mouth, but years later we come to find out that Ozzy‘s behavior was a result of his alcohol and pill intake behind the scenes. Initially, the elder Osbourne‘s erratic behavior was said to have been the result of a medical problem, but a sober Ozzy, and his kids Jack and Kelly, say that it was all rubbish.

All five of the Osbourne children (the older two are from his first marriage) got an opportunity to air out their grievances with their father. Their stories are all too similar — the consensus being that Osbourne was not there emotionally for them as they were growing up, and the reputation that their father garnered throughout the years wasn’t amusing, funny or entertaining to them. Ozzy‘s kids Jack and Kelly even developed addictions of their own throughout the taping of the ‘reality’ show and both faced their substance abuse issues by entering rehab. Jack‘s sobriety served as the catalyst for the senior Osbourne to begin to embrace his own recovery. Jack didn’t sugar coat his feelings toward his father, and it appeared to have been what Ozzy needed to conquer his addiction once and for all. Ozzy, at the time of the filming of this documentary, was clean and sober for five years — free from all illicit substances… alcohol and yes, even nicotine.

The God Bless Ozzy Osbourne film closes with Ozzy going back to his childhood home with his wife Sharon. He reflects on his life, his parents, and his family. You get the sense that Ozzy is in a much better place, that he is content with his life, and grateful to be alive.