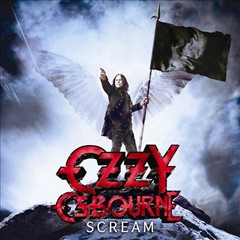 Review from Dustin Hinson:
With the music industry not selling the way that it use to, you would think that Ozzy Osbourne would do his best to have a guitarist that is world-known instead of one that only has a cult following. Scream is by far the worst album in Ozzy‘s well-known career, and many fans have voiced this.

When I went to Walmart on the day that Scream was released I thought I was getting a bargain by only paying $9 for it — but it was a bargain that I soon came to regret. There are a couple songs on this album that can qualify as redeeming, but there’s not enough of them to keep the album respectable and honest. Guitarist Gus G. cannot, and will not, be able to keep up with the legends that Ozzy has worked with over the years, and yes people, Jake E. Lee is included in that list.

The songs I can count as redeeming are “Life Won’t Wait”, “Time”, and the first single “Let Me Hear You Scream”. This is not a great album and I wouldn’t even count it as mediocre. Sadly, Ratt‘s new album Infestation was worth far more money than Scream was — and this Ozzy CD may even be worse than L.A. Guns‘ Covered In Guns.

For those that are considering buying Scream, I have one word of advice — DON’T!. Scream was the biggest waste of $9 in my life, and I hope that Gus G. isn’t on the next Ozzy album.

Review by Ruben Mosqueda:
I’ll admit that I was disappointed when I heard that Zakk Wylde was out of Ozzy Osbourne‘s band. After all, the guy was part of a couple of Ozzy‘s shining moments with No Rest For The Wicked and No More Tears. My disappointment quickly switched to anticipation when his replacement was announced — exit Zakk Wylde and enter Gus G., who has risen to prominence outside of the United States with his work in Dream Evil and Firewind. Gus G. is a power metal guitar wizard, and joining him is new drummer Tommy Clufetos (formerly of Ted Nugent‘s band and most recently Rob Zombie). Ozzy Osbourne‘s new band is, on paper, a powerhouse — rounded out by Blasko on bass and Adam Wakeman on keyboards.

After the monster hit album No More Tears, Ozzy has struggled to match that album, song for song, with anything since. Ozzmosis was the closest thing he’s done to match No More Tears while Down To Earth was a plagued with mediocre songs penned by several outside writers (and the lack of input from Zakk Wylde). Wylde came back for that particular album, but Ozzy fell short in his quest for a hit single and alienated some of his audience. On Black Rain Ozzy righted the ship. Wylde co-wrote eight of the ten tracks on that album, thus it featured less filler and was consistently good. It was also very contemporary without Ozzy losing his identity — this no doubt was due to producer Kevin Churko. Black Rain was a return of sorts for Ozzy Osbourne.

The question now is how will Ozzy Osbourne‘s new album fare? On Scream, Kevin Churko is once again at the helm resulting in a production that is a continuation of Black Rain… slick, pounding and bombastic. Ozzy, never the power vocalist, sounds pretty good on here as he doesn’t tackle anything that he couldn’t pull off in a live setting. Tracks like “Let It Die” and “Let Me Hear You Scream” are clearly written with the live setting in mind. But overall Scream falls short in the songwriting department — if there would have been more songs like the aforementioned tracks this album would have been mentioned in the same sentence as No More Tears or Blizzard Of Ozz. Instead Scream will go down as another transition album where Ozzy introduced his new guitarist. I’m confused, if you’re bringing in a new guy shouldn’t you let the guy loose and allow him to inject his own style into the songs? Gus G. came in too late to do any writing, but I swear to you that if you didn’t know there’s a new guy in the band you’d think this is a restrained Zakk Wylde playing. I just can’t get my mind around why Gus wasn’t allowed to make his mark on Scream. If you want Zakk lite wouldn’t it make sense to keep him around?

The verdict is that Scream isn’t a landmark album. It falls somewhere between Down To Earth and Black Rain in the Ozzy Osbourne catalogue. Regardless of what Scream isn’t, it will sell relatively well and becomes nothing more than a reason for Ozzy and Co. to hit the road again.