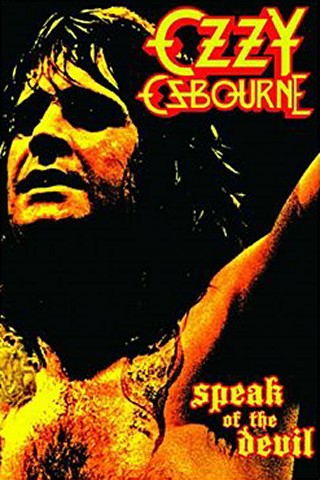 Review:
When the great Randy Rhoads was killed in a disastrous airplane stunt on March 19th, 1982, the world thought that it was ‘the end’ of Ozzy Osbourne‘s brief solo career. At the time Ozzy‘s solo band — consisting of guitar hero Rhoads, bassist Rudy Sarzo and drummer Tommy Aldridge — were in the midst of a tour promoting Ozzy‘s sophomore effort Diary of A Madman. Following a brief break to mourn the loss of Rhoads and the rest of their friends lost in the wreck, Ozzy decided to press forward with the remaining dates of the tour with guitarist Brad Gillis — best known for his work with Night Ranger.

If you’ve followed Ozzy Osbourne‘s solo career you’re aware that he issued a live album tilted Speak Of The Devil back in 1982, consisting solely of Black Sabbath covers. The album was well received and was a jab at his former bandmates who at the time who were riding high with Ozzy‘s replacement Ronnie James Dio. This DVD is also titled Speak Of The Devil, but does NOT consist of only Black Sabbath material. Instead this collection was filmed by MTV at Irvine Meadows, California and aired on the network as a Halloween special later that year. There have been many inferior and heavily circulated bootleg copies floating around over the years, but now the Osbourne camp and Eagle Rock Entertainment have done a fantastic job bringing this long lost classic concert back to life.

The set list consists (as you can imagine) of tracks from Blizzard Of Ozz and Diary Of A Madman along with the Black Sabbath staples “Iron Man”, “Children Of The Grave”, and “Paranoid”. Brad Gillis played Rhoads‘ solos and riffs respectfully, and it makes me wonder why he was not hired ‘permanently’ to take over the role of guitarist in the band. While he’s not Randy Rhoads — he was a damn fine stand-in.

The sound on this DVD is great, the picture is fantastic, and the liner notes are excellent and written by the classy Rudy Sarzo. The only gripe I have is that Ozzy‘s vocals appear to have been ‘cleaned-up’ and overdubbed in the process of restoring this concert. If you can live with that — you’ll enjoy the show.