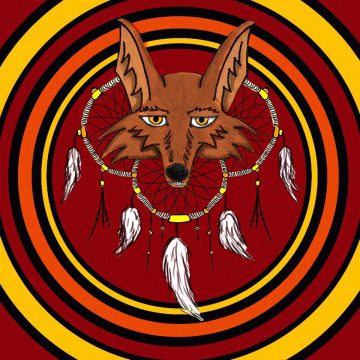 Review:
For quite a while now — and I know that my predecessor Skid had the same problem — there have been just too many albums making their way to the Sleaze Roxx headquarters without any prior notification and it’s simply not possible to review them all. That being said, every album that does make it through the door so to speak gets a listening “audition” with some albeit shorter than others. I would love to review all the albums that make their way in but many of them don’t even fit Sleaze Roxx‘s musical scope, time restrictions simply do not permit me to do so and most of the other Sleaze Roxx contributors who review albums seem to gravitate towards releases from better known artists (which is fair enough). Once in a while, an album from an artist that I have never heard of before (or barely) comes through the door, which really catches my attention.

Pablo de León & The Mother Coyote Band‘s debut album Mother Coyote is one of those. If memory serves me right, I did receive some sort of communication from presumably Pablo de León asking if Sleaze Roxx would review the album. The first thing that caught my attention was that I had to crank up the volume on my car stereo to hear the songs. Clearly, the production  is lacking in a big way. I’ve never really cared that much about this type of issue since cranking the volume usually takes care of that problem to a certain extent. It’s like listening to an older album from the ’80s. There’s a big difference between listening to Dirty Looks‘ Cool From The Wire on the original CD pressing and listening to it via the Rock Candy Records reissue many years later but the album is still a great one no matter what. The second thing that really caught my attention was that the songs are really quite good — dare I say very good at times — with lots of well constructed bluesy rock fuelled tracks. There is no doubt that guitarist Pablo de León has a lot of talent and has written some great songs. Tracks like “THC Blues” (which I thought was called “Medicine Man” when listening to it), “World Comes Crumblin’ Down” and “Wanderers And Vagabonds” take you on an exciting journey filled with emotion, some cool melodies and great blues licks. The songs are so well constructed that I could easily see them being played on classic rock radio.

There are some issues though. Although there are some great songs on Mother Coyote, the production is really lacking and Pablo de León‘s vocals are often the weak point during the songs. While there is no question that de León can play a mean guitar — he tackles electric, slide and acoustic guitars on the album with a lot of success — his vocals just aren’t strong enough to carry the blues filled tracks most of the time. Just think if you had to listen to a Great White song without the Jack Russell vocals? Well, we’ve had Terry Ilous and Mitch Malloy in the last eight years or so and although they don’t come close to properly handling the Russell era Great White material, they are both good singers in any case. What makes the Great White songs so good is the Jack Russell vocals and the emotion that he conveys while singing those tracks. That clearly is missing on Mother Coyote. That and the keyboard overload that can be found at times on certain songs. In particular, tracks like “Karma” and “Tell Me What’s Your Sorrow” suffer from keyboard overkill (which sounds like an organ) similar to what Phoenix In Flames unfortunately did on certain songs off their latest self-titled album (which I recently reviewed).

Given that Pablo de León & The Mother Coyote Band‘s album Mother Coyote has probably not hit mainstream radio by any means, the songs on the record are likely not known by that many people. What I would really like to see happen is for those songs to be fleshed out a little bit (sometimes there’s just too many instruments going on like on “Lucifer’s Road”) and get re-recorded with a really good singer that can handle blues based songs and take them to that next level. I am going to go out on a limb here but I think that if Jack Russell was provided the well constructed blues filled songs from the album Mother Coyote and given the chance to make them his own, we might have the best album that the singer has come up with since …Twice Shy was released in 1989.