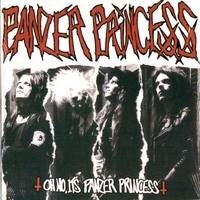 Review:
I have been waiting a long time for this, a CD so full of dirty, bluesy, rock and roll, that I can almost smell the gin and cigarettes.

From Sweden comes Panzer Princess, with their debut CD Oh No, It’s Panzer Princess. It’s obvious their native land appreciates good time rock and roll, more so than the current musical scene we are hearing in the United States. There have been quite a few bands from Sweden lately that understand image is as important as the music.

This 8-track offering is full of filthy, gutter-level rock and roll, along the lines of Hanoi Rocks. The truth of the matter is, there isn’t anything original about any of the tracks here, but that’s fine with me. These guys know how to rock and have fun doing it, it definitely shows.

“Asshole, Bastard (Son Of A Bitch)” kicks things off with a thump to the cranium and every track follows suit, such as “A Mess” that teeters oh-so dangerously into punk territory. Kelly Morgue‘s vocals are raspy, and that works fine for the material here. Tank Hooker plays guitar as if he is taking a swig from a Jack Daniels bottle and churning out power chords in one swift move. The rhythm section of Sir Alex on bass and Simon LaRue on drums is ferocious. “Rob The Bank” sounds so eerily close to Bon Scott-era AC/DC that you may find yourself believing this is one of their lost tracks. Forget any slow songs or power-ballads, Panzer Princess have no time for that.

This is good-time rock and roll at its best. The only complaint I have is that the production is a bit weak, and I would have liked to hear the rhythm section brought up more in the mix. It is too garage-quality, however that may have been the intention. Too polished would have taken away the grit and the grime. Overall Oh No, It’s Panzer Princess makes me want to down a fifth of gin and trash a motel…not advisable, but fun nonetheless.

Reviewed by Bruce Forrest for Sleaze Roxx, May 2009.