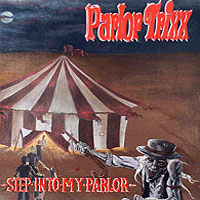 Review:
A few years back I was at a local music festival when I wandered over to the second stage and watched a band proceed to kick my ass. I had no idea who they were or where they were from, but I did know that they were one of the few newer bands to come to my area and actually impress me. I later found out that the band was called Parlor Trixx and hailed from Regina, Saskatchewan! I had forgotten all about these guys until I stumbled upon their website recently and decided to purchase their one and only album – I don’t regret that decision.

Step Into My Parlor could easily have been named Step Into 1989 as there is nothing modern about this band. All they have done is take the best elements of the 80s rock scene and have made it their own. People may argue whether this is heavy metal, hard rock, glam metal or hair metal – but for the sake of argument let’s just settle for fucking incredible rock ‘n’ roll. As I keep spinning this release two things keep coming to mind; 1) I can’t seem to pinpoint which song I like the best, cause so many of the tunes are top notch, and 2) I can’t seem to find a song that I don’t like.

The opening track sounds like something Def Leppard might have done before they resorted to soulless overproduced boredom. But that is the only time Def Lep comes to mind, and by the time “Queen City Saturday Night” hits the boys have entered glam territory (and you have to give credit for the band mentioning their own name during this song). But just when you think you have the band pegged they change the sound once again, like the sleazy boogie of “Daily Driver Manifest” and “Aphrodisiac Smile” (an old Age Of Electric song that sounds tailor made for the Electric Angels) or the straight-ahead no-frills rock of “Over The Top” and “Bitch”. In all honesty, you could blindly pick any one of the ten tracks on this CD and always come out winning.

Simply put, this is great party rock with huge choruses (the band has a knack for vocal harmonies) and enough riffs to satisfy any hard rock fan. Parlor Trixx manages to put the fun back into music and I’m looking forward to the follow-up. www.parlortrixx.com.