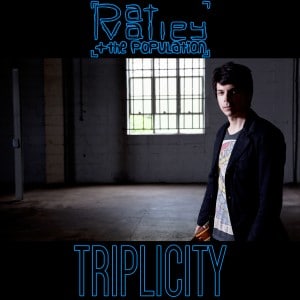 Review:
Pat Valley warns that the three tracks on his debut solo EP Triplicity are very diverse but I really was not expecting so much diversity on this EP. What it really comes down to is that Pat Valley + The Population explore really three different musical genres on a three song EP.

If the first track “Samantha (In The Psych Ward)” was not on the EP and I had only heard the other two songs on Triplicity, I would not have even bothered reviewing this EP for Sleaze Roxx because the latter two tracks are so far off in left field from what Sleaze Roxx would cover. However, given that I really like the song “Samantha (In The Psych Ward)” and since Valley is the guitarist for Grayson Manor — a group covered by Sleaze Roxx in the past — Triplicity or rather the song “Samantha (In The Psych Ward)” is worthy of a review. Funny enough, the three guys that played on Grayson Manor‘s “comeback” EP Return To The Manor — Valley; singer, bassist and keyboardist Brad Cox; and, drummer Rodney Beauboeuf — play on Triplicity making it feel like the guys are simply changing musical direction(s) rather than continuing with Grayson Manor. Time will tell in that regard.

My advice to you for Triplicity is simply to start and end with the first track “Samantha (In The Psych Ward)” which is a straight forward catchy punk rocker with none other than ex-The Misfits singer Michale Graves on lead vocals. The song starts off quickly and never lets up with Valley playing simple yet really enjoyable guitar riffs. Unfortunately, the next two tracks are simply not at all the type of music that I would usually listen to. “What Do You Feel” which features the female vocalist Brenda Carsey is really just slower pop rock with electronics — yikes, enough said there! The title track “Triplicity” feels like at least two songs in one with the beginning feeling like some weird moody keyboard laced alternative pop song before a simple guitar riff kicks in and bridges to a heavier type music piece before you finally hear guest vocalist Braxton O’Neal sing.

Given the three very different musical genres featured on the three tracks offered by Pat Valley + The Population on Triplicity, it feels like Valley has not chosen what musical path that he will pursue so he is testing the waters with those three songs. It could be that Valley will continue to come up with very diverse music on his subsequent releases but as long as he does, it is hard to imagine that he’ll be able to really make a dent in any musical genre.

Track 1 on the “Triplicity” EP. Featuring Michale Graves (formerly of the Misfits) on vocals, Rodney Beaubouef on drums, and Brad Cox on bass/backing vocals….