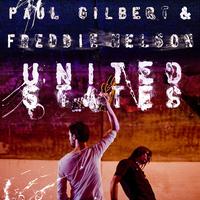 Review:
Paul Gilbert is best known for his mad guitar skills as both a solo artist and for his tenure with Mr. Big and Racer X. As you readers can attest, Mr. Big and Racer X‘s music was chock-full of melody and shredding. Gilbert gained notoriety as one of the premiere guitarist of the 80’s as a result of his performances on the records of the aforementioned bands. After his time with Mr. Big came to an end he launched a solo career and continued writing and recording albums.

I for one feel that instrumental albums are limiting, not every album can be as accessible as Joe Satriani‘s Surfing With The Alien, and Paul Gilbert was no exception. I was surprised that Paul had paired up with a singer-songwriter friend of his from Pennsylvania by the name of Freddie Nelson. To say that Nelson is from the Freddie Mercury school of rock ‘n roll would be an understatement as the guy sounds like a grittier version of the rock legend.

The songs on United States fall into the Queen meets the Marvelous 3 realm, and that to me is refreshing. United States might not be so easy to digest by guitar gearheads who are awaiting an explosive, balls-out Van Halen-esque effort, but I think it will open the doors to a new audience for Gilbert. The songs are catchy and driven by the lush melodies and stellar musicianship. The standout tracks on United States are the abstract hit single in waiting “Paris Hilton Look-Alike”, the poetic “Girl From Omaha”, and “I’m Not Addicted” which features an unforgettable Van Halen inspired riff.

Reviewed by Ruben Mosqueda for Sleaze Roxx, May 2009.