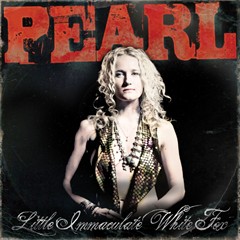 Review:
Pearl Aday has arrived! Pearl is the daughter of rock ‘n’ roll legend Meat Loaf and the wife of Anthrax guitarist Scott Ian. Sure they are high profile names, but she has stepped out on her own to build her own impressive resume. Pearl has toured with her father and as a ‘Crue Slut’ with Motley Crue on 2000’s ill fated ‘Maximum Rock Tour’.

This leads me to Pearl‘s debut album Little Immaculate White Fox. I know it sounds like the title for music on the lighter side, but that’s simply not the case. Pearl rocks, and rocks hard! The opener “Rock Child” sets up the album nicely and is soulful, melodic and catchy. She also covers Ike and Tina Turner‘s “Nutbush City Limits” with class and ease, like the song was written specifically for her. I’ve heard people compare Pearl with Janis Joplin (her first name may have something to do with that), and while they are both women and they both have a set pipes I’d say that Pearl is the same league as Sass Jordan — who is more versatile, accessible and has broader appeal.

Records like Little Immaculate White Fox don’t sell millions of copies anymore, even with guests like Ted Nugent, Scott Ian and Alice In Chains‘ Jerry Cantrell along for the ride. It’s a damn shame, because this hard driving blues inspired rock ‘n’ roll is just meant to be played in arenas across America. The standout tracks on Little Immaculate White Fox are “Anything” featuring Cantrell, “Rock Child,” “Whore” (which is very Meat Loaf-esque) and the blazing version of “Nutbush City Limits”.

The old saying applies with Pearl‘s Little Immaculate White Fox — the apple doesn’t fall too far from the tree.