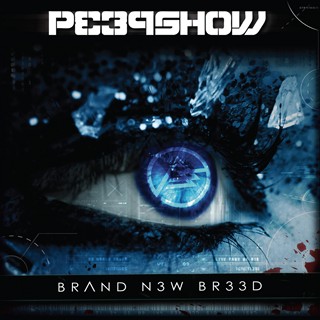 Review:
To say Peepshow has gone through a transformation since their 2009 debut Out For Blood would be a huge understatement. Gone is the Wednesday 13 meets Crashdiet sound that is being beaten to death lately, replaced by a more modern and almost robotic approach. It’s a big gamble for sure and one that could alienate the hardcore fans who helped their debut album sell out.

One thing you’ll notice right away is the influx of keyboard and string sounds on Brand New Breed. They add an entirely new element to the band, one that you may or may not buy into, and you have to wonder if someone got a new gadget as a gift and couldn’t help but play with it in the studio. At times it works really well and gives Peepshow a much more grandiose sound. A great example of this is “Live Free Or Die”, a great track that chugs along with the keyboards acting as icing on the cake — it immediately reminded me of the Babylon Bombs‘ over-the-top single “Liberation”.

“Trouble”, and especially the anthem “All Or Nothing”, harkens back to Peepshow‘s roots as they explode through the speakers. Both tracks take elements of the band’s humble beginnings and expand upon them. Even better yet is “Feed On Me”, a song that left me a touch cold during the verse, but managed to come together perfectly during the chorus. The title track and “Waking The Dead” are crunchy scorchers that speed into Shotgun Messiah‘s Second Coming era with Johnny Gunn growling and screaming for all he is worth, resulting in the album’s finest moments.

The ballad “Irreversible” without a doubt has cross-over appeal, as does the haunting “Only A Dream”, which means I personally didn’t care much for them. But if Peepshow is going for commercial success it may be these songs that give them their best shot at stardom.

Not content to become another face in the crowded sleaze scene, these Scottish rockers expanded their horizons and took a hell of a chance with Brand New Breed. This isn’t the type of music that I would usually listen too, but some unexplainable force keeps drawing me in — the disc as a whole is dark, moody, unpredictable and not afraid to push boundaries. Whether the band’s existing fan base agrees with the transformation found on Brand New Breed is debatable, but I give Peepshow lots of credit for not playing it safe.