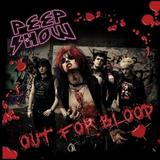 Review:
Crashdiet have opened up a lot of doors for the next generation of sleaze bands, so it isn’t surprising that so many newer bands have been trying to recapture their sound. The latest is Scotland’s Peep Show, who have managed to make the Crashdiet sound more aggressive and venomous.

Peep Show successfully mixes the raw sleaze of Crashdiet with the horror and vocal stylings of Wednesday 13 and his band the Murderdolls. Because of this combination Peep Show aren’t very commercial – they are way too rough, sleazy and belligerent to ever be considered mainstream. It is these qualities that make the band work though as they have the potential to be one of those groups that succeeds with an under-ground cult following.

One thing I will say about Out For Blood is that it doesn’t offer much variety. Right from the opening scream of “The Stand” to the final scream of “Cat Boy” this CD is unrelenting and never takes its hand off your throat. If you’re expecting a ballad or some melody, you may as well move on as Peep Show rock non-stop, offering 10 tracks of dark sounding sleaze. The title track is fast and furious, Vains Of Jenna‘s bastard son if you will, while Peepshow displays hints of a dirty Faster Pussycat – all the while guitarist Rusty Gill isn’t afraid to shred all over Johnny Gunn‘s screeching vocals.

Out For Blood is one of those discs that people are either going to love or hate – there is no middle ground here – and it would make the perfect soundtrack to a B-movie. There is no doubt Peep Show is rough around the edges, but that is part of their charm. I have a feeling that the band has yet to reach their peak, and with a little more help from the Crashdiet gang could release something very special in the future.