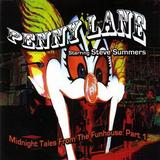 Review:
Pretty Boy Floyd singer Steve Summers features (or ‘stars’ as the CD cover states) on Penny Lane‘s newest release Midnight Tales From The Funhouse: Part 1. Summers has a fairly distinctive voice, and coupled with the fact he had a hand in co-writing most of the songs on here, it comes as no great surprise that Penny Lane sound like Pretty Boy Floyd.

After a 47 second musical circus themed interlude things kick off with what I think is the worst song on this disc “Ticket To Heaven”. This sounds whiney and is as flat as a deflated and sunken souffle. It even sounds like it could have been recorded inside an oven.

Thankfully things improve. There are a couple of cover songs here and Cheap Trick‘s “California Man” is one of them. This song is tailor made for the delivery that is the Steve Summers‘ style and could have been penned especially for him. Another cover is of The Cars‘ “Dangerous Type”, although I’m not sure purist fans of that band will appreciate Penny Lane‘s rendition. Although not a stand out, it doesn’t sound too bad and is a pleasant change in tempo, plus the production seems better on this track. “Waiting For You” is a catchy fun song and the last three tracks are likeable ones as well, all of which could easily fit into the glam-era Pretty Boy Floyd catalogue.

Everything on Midnight Tales From The Funhouse: Part 1 has the potential to be top notch. For a start Steve Summers is sounding great, vocally he is in fine form and it doesn’t sound like his voice has aged a day. Good backing vocals and the superior guitar work from Ray C. and Alice Cooper‘s Keri Kelli also help sell this CD. What makes this release less than top notch is the substandard production, especially the drum production. The often hollow sounding drumming is placed so far to the forefront, rather than blending in, that it becomes monotonous and tends to sound the same on nearly every track.

While I wouldn’t rave about Midnight Tales From The Funhouse: Part 1, I do like this disc. These are a pleasing bunch of glam type songs, with a couple of nice ballads thrown in, it’s just let down by below-par production. There really is no avoiding the Pretty Boy Floyd comparisons here and if you aren’t a PBF fan you more than likely won’t like this Penny Lane release. If you can get past the thin production Midnight Tales From The Funhouse: Part 1 is probably going to be satisfying enough for glam fans.