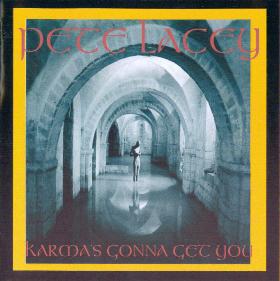 Review:
Pete Lacey is essentially a one-man band that loves melodic rock. This release contains all the big harmonies one would expect from this genre, but Lacey himself has a voice that one wouldn’t usually associate with melodic metal. He has a screechy, at times nasally vocal sound, that changes from song to song and occasionally has an Axl Rose feel – and like Axl, listeners will either love or hate his voice.

A riff similar to that found on Ozzy Osbourne‘s “Shot In The Dark” pulsates through “Leaving Tonight”, one of the better songs on Karma’s Gonna Get You. “Release MY Heart” reminds me of a T.N.T. with the huge vocal harmonies, while the majestic “Into The Fire” has some Dokken moments and great guitar work. “Nowhere To Run” is a high octane rocker with a great energetic riff but the vocals don’t do this song justice.

The vocals will be the determining factor on whether one will enjoy this CD or not. As for myself, on some songs I like Pete Lacey‘s gritty delivery and on other songs I just can’t get into it. For example his cover of Eric Clapton‘s “Wonderful Tonight” (which is an unlisted bonus track) just doesn’t work at all, as he sounds strained trying to emulate Eric.

All proceeds from this release are being donated to a charity called On Track which helps adults with severe learning and physical disabilities. A limited run of Karma’s Gonna Get You will also include a copy Pete‘s previous release Eternal Pursuit. This may not be the best album to come down the pipe this year, but there are enough cool tunes to make it worthwhile and it will help support a good cause. Email spitfirewolfmusic@hotmail.com for purchasing information.