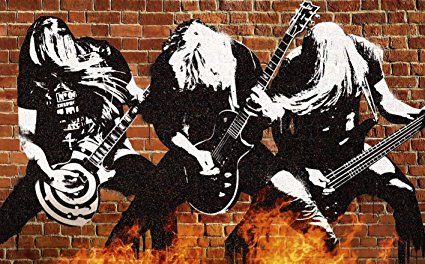 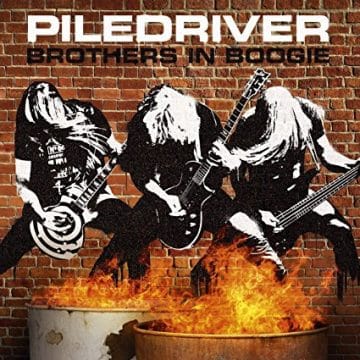 Review:
Part of the fun of “running” the Sleaze Roxx website is receiving CDs from all over the world out of the blue. Piledriver‘s Brothers In Boogie arrived at the Sleaze Roxx headquarters with little fanfare quite a while back with I believe four other albums that at first glance would not fit Sleaze Roxx‘s musical scope. However, one look at the cover of Piledriver‘s Brothers In Boogie had me very interested in hearing this album of likely sleazy booze soaked rock n’ roll.

As I put the disc on, I was rather surprised to hear some rather classic and quality rock n’ roll at that. I was so impressed that within a few songs I started to flip through the CD booklet to find out more about these guys. Only one name was familiar which added instant credibility to the band. The producer was none other than Stefan Kaufmann who most will know for being the drummer on most of Accept‘s earlier albums including the stellar three punch of Restless And Wild (1982), Balls To The Wall (1983) and Metal Heart (1985). Those who have followed Kaufmann‘s career or Udo Dirkschneider will also know that the former ended up quitting drumming due to health problems but later played guitar in U.D.O. for over 15 years. Kaufmann has apparently now turned to producing including handling the production duties of Liv Sin‘s upcoming debut album. Given the quality and depth of Kaufmann‘s resume, I was not surprised by how good fellow German rockers Piledriver‘s album Brothers In Boogie was sounding.

I have to admit that I have had Piledriver‘s new album for some time. It’s not that it has been collecting dust but rather that it has been getting a regular spin just about every week for a number of months now but i just never got around to reviewing it. As I finally turned my mind to put pen to paper — so to speak — or more like fingers to keyboard, I started browsing the internet to find Piledriver on Facebook, etc and was shocked to see that they were advertising themselves as Europe’s finest Status Quo tribute band. A tribute band? I had a feeling that Piledriver had been around for a while given how tight the band was sounding and their photos in the CD booklet, which showed a few wrinkles here and there but I simply would have never guessed that they mostly operated as a tribute band. Given that I mostly just know of the name Status Quo but not the music behind that legendary group, this is one time that it is the tribute band that will likely make me look into a band’s music catalogue.

One of my common complaints about records is that there are too many songs leading to some unwanted filler tunes. While Piledriver‘s Brothers In Boogie offers a whopping 13 tracks and two additional bonus tracks which are alternate versions of two of the best songs on the album, I can honestly say that every track is a good one on this release. All the songs definitely have that old school groove yet sound really crisp and clean. A lot of credit likely has to go to producer Stefan Kaufmann. The tracks on Brothers In Boogie won’t set the world on fire for being the fastest or speediest but quality, finesse, brilliant songwriting and moderate paced classic rock are all on hand making the songs very easy to appreciate. The guitar playing and sound is stupendous. Most of the songs are written by guitarist and singer Michael Sommerhoff with lead guitarist Peter Wagner chipping in here and there. Not surprisingly, there are two Status Quo covers consisting of “Don’t Think It Matters” and “Drifting Away.” While both songs fit in well with the rest of the tracks on the album and are quite enjoyable, I find them totally unnecessary given that Piledriver can more than hold their own writing their own songs and don’t need to be covering anyone’s songs based on the quality of their own penned tracks.

It is difficult to choose which are my favorite songs on Brothers In Boogie because every one of them is a good one. There is however one song which always stands out whenever I listen to the album and it’s the record closer “Last Words” which clocks in at over eight minutes. You also get the very condensed version as a bonus track and which is less than half in length. The feel and atmosphere of the song “Last Words” reminds me a lot of the overall feel on Petra‘s Double Take, which is one of my favorite albums of all-time. There’s something magical about “Last Words” and it’s obviously a special song for Sommerhoff who dedicated the track to the memory of his deceased father. If you had to twist my arm to choose a few more highlights on Brothers In Boogie, I’d name the video single “Rock In A Crossfire-Hurricane,” the peppy “Together” and the harmony laden “Natural Born Rockers.”

The only pity about Piledriver‘s Brothers In Boogie is that it was released back in 2015 because had it been released in 2016, I would definitely consider it for Sleaze Roxx‘s Top Ten Albums of 2016. Give this album a chance folks. This is quality stuff!

PILEDRIVER are firmly established as a STATUS QUO tribute band and have been playing on classic rock festivals all over Europe for more than 20 years. PILEDR…

Here´s the official video for the first singlefrom the new PILEDRIVER-album “BROTHERS IN BOOGIE” which will be out october 14. The single release includes a …