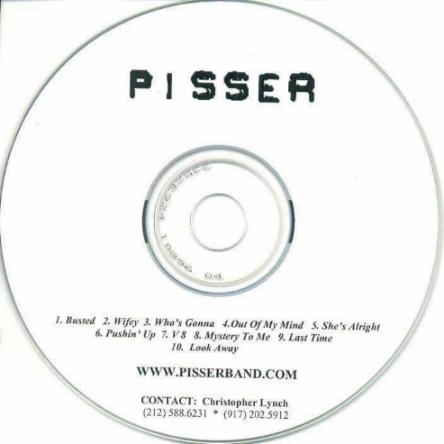 Review:
Named after a vulgar slang that can mean one is extremely disagreeable or extraordinary, New York’s Pisser have released an album that covers a lot of musical territory, with some good and some bad results. At certain times the band is a convincing AC/DC knockoff, yet in the next breath they are sounding like a funky Jackyl!

“Busted” starts off with a subtle riff hidden behind movie overdubs before it kicks into a killer Bon Scott era AC/DC romp. The disc lets up until “She’s Alright” comes around which reminds me of Ted Nugent‘s “Wang Dang Sweet Poontang” — in both the guitar lick and vocal attitude. The up-beat “V 8” and “Mystery To Me” both head into Jackyl territory — mainly because vocalist Eric J sounds a lot like Jesse Dupree. “Look Away ends the disc with some more AC/DC guitar sounds with a bit of distortion added to the mix.

There are some cool tracks here (especially “Busted”), but it feels as if Pisser has yet to find their identity. There are just to many musical directions being displayed here, and while the band does in fact have talent, at times it is just overwhelming. Hopefully the band chooses a sound they are most comfortable with (my preference would be the AC/DC route) and run with it. More info on Pisser can be found at www.pisserband.com.