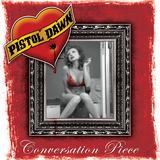 Review:
Highly anticipated, eagerly awaited and down right necessary is the Eonian Records re-issue of Pistol Dawn‘s two independently released EPs from 1990. The Shot In The Act and Hard Way EPs have been combined here and entitled Conversation Piece. The album packaging is nicely done with band shots, thank you’s, a nice cover shot (half naked chicks are always encouraged, if not required) and by damned if the content of the disc isn’t some of the best rock n’ roll you have never heard!

The first four tracks come from the Shot In The Act EP and were produced by none other than glam-guru Chip Z’Nuff (Enuff Z’Nuff bassist/lyricist). And his participation is obvious, from his patented bass lick on “Message In A Bottle” to his writing assistance on “Dreams Come True”. Chip‘s presence is known, but only enhances the abilities of this stellar quartet from Chicago, Illinois, who throughout this EP and the subsequent six tracks from the Hard Way sessions come to kick ass and chew bubble gum! But as you may know, they have run out of bubble gum and they are more than likely going to take your girlfriend as well.

Aside from the obvious Enuff Z’Nuff and Lillian Axe influences and comparisons, I hear a lot of Black N’ Blue in the songs and musical stylings of Pistol Dawn‘s Freddie Brecht, Scotti Ryan, Don Ferguson and Rob Stratton. All of whom are playing perfectly tasty rhythms, licks, leads and vocals to set all the young ladies hearts a-flutter and a bottom end/rhythm section to rattle the heads of all the hard rock boys. The caliber of musicianship on this recording should have placed Pistol Dawn on everyone’s lips and in everyone’s players.

The standout moments on Conversation Piece are “Message In A Bottle”, “Wish Upon A Star”, “Still Running Wild” “Gone Away” and the title track, but the entire album is pure sleaze, glam, and hard rock bliss! It will certainly have even the most fickle listener tapping their feet and singing along in mere moments, if not you are def, dumb or dead!