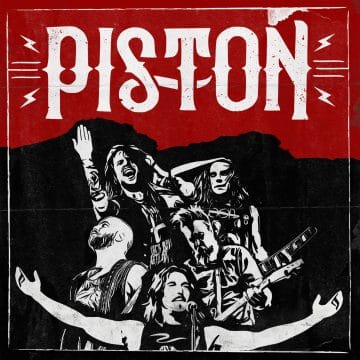 Review:
Upon listening to my promo copy of Piston‘s upcoming full-length self-titled album, all I could think was rock n’ roll doesn’t have to be complicated. Keeping it simple can yield great results. Piston aren’t reinventing the wheel with their music as they deliver some straight up rock that is almost impossible not to like. Frankly, I thought that the songs were so simple that I might get bored of them after a few listens but the opposite has occurred. The more I listen to Piston‘s self-titled record, the more I enjoy it and the more I discover something new about each song that I didn’t notice the previous times that I heard it. And although the songs themselves seem to simple, the reality is that it’s tough to write simple great songs. After all, if Poison could come up with a “Nothin’ But A Good Time” on every record, they would have done so in a heartbeat.

Piston rely on some simple yet effective guitar riffs, the raspy vocals from Rob Angelico and a solid rhythm section. They are not shy from repeating guitar riffs, vocals, etc. to get them embedded in your mind. The opening track “Dynamite” with the words “C’mon, c’mon” is a prime example. Piston are also very good at pacing themselves and letting the various sections of their songs a little room to breathe. Take for example the band’s single “Rainmaker” which is almost played at a slower pace than you would expect but it works and gives the track a certain heavy feel to it like Black Sabbath. Angelico‘s singing on the track “Go Now” reminds me at times of the singing from Bryan Fontez of the now defunct Canadian band Last Bullet. Angelico‘s raspy delivery also reminds me a bit of current The Dead Daisies frontman John Corabi‘s vocals. There’s a certain swagger to Angelico‘s singing that is really enjoyable.

My favorite songs on the record are the single “Rainmaker”, the faster paced “One More Day” (whose intro reminds me a bit of U2 or The Cult), the likely band anthem “Leave If You Dare” (which the band released a video for with its previous singer Steve Dunn five years ago) and “Let Us Rise.” The two tracks that I could do without are the ballad “Carry Me Home” and the more atmospheric closer “Into The Night.” That being said, one or two weaker songs on an album is not the end of the world as The Lazys‘ Tropical Hazards had one song that I didn’t really like (the ballad “Young Modern Lightning”) yet it finished at #1 on the Sleaze Roxx’s Top Ten Albums of 2018.

Many bands could learn a lesson or two from Piston on why keeping things simple can yield great results. Piston are definitely a band to watch out for and play a simple brand of rock n’roll that can potentially be appreciated by many many people. In other words, with the right marketing and push behind them, Piston could become a household name. Expect to read and hear a lot more about Piston on Sleaze Roxx in the future.

‘Rainmaker’ is the second official single from Piston’s debut album due for release in September 2019. Download the single from May 31st – https://music.appl…

Piston‘s “Leave If You Dare” video (released in 2014 with band’s previous singer):