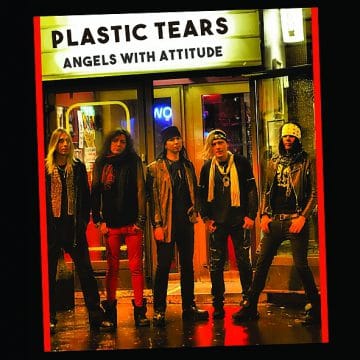 Review:
Since the release of Plastic Tears‘ third full-length studio album Angels With Attitude, I have heard a lot of good things about the record. My first introduction to Plastic Tears dates back to early 2016 when I posted on Sleaze Roxx about their video for the song “Rhythm Rider” from the EP of the same name. At the time, while I liked the song, I thought the vocals were kind of hard to get into with singer Miqu December‘s slight Eastern European (to my ears) accent. Given that “Rhythm Rider” made it onto Angels With Attitude and having listened to the album on and off for the last couple of months, my initial thoughts for “Rhythm Rider” apply to the rest of the tracks on the record. In a way, it’s a shame because the songs are actually well composed and some are really quite catchy. However, I simply have a hard time getting into December‘s vocals and that kind of puts a damper or dark cloud so to speak over all the tracks on the record.

Amazingly, Plastic Tears date all the way back to 1992. They have taken their time releasing full-length albums with about nine years between releases. The group’s debut album Stranded In Rock ‘N’ Roll was released in 2000 followed by Nine Lives Never Dies in 2009 and now Angels With Attitude. I can’t say that I am familiar with the band’s two first albums so can’t say whether the band has grown or changed its style over the now 18 years since its debut album. What you do get from Plastic Tears on Angels With Attitude is a lot of Hanoi Rocks influences mixed in with a little Faster Pussycat and some pop rock tendencies.

There are a few standout tracks, namely the upbeat and peppy “Dark Passenger,” the faster “Iris Kick,” “Rhythm Rider” and the piano led rocker “Miss Stumbling Legs.” One reason that those four songs stand out is that there are quite a few background vocals on each of them so those kind of help bolster December‘s vocal delivery. Funny enough, December‘s vocals remind me quite a bit of Lipstick frontman Greg Troyan‘s singing. Just like Troyan, December‘s singing is better on the faster tunes but doesn’t really shine on the slower ones. One such example is “Secret Society” which ends off rather oddly with a slow piano ending. The music itself (minus the vocals) on Angels With Attitude is actually really good with strong melodies throughout the entire album.