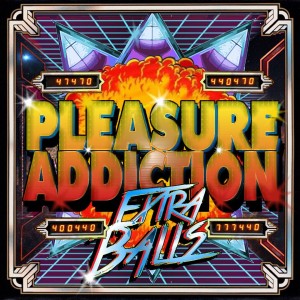 Review:
“First class hard glam” — this is the description that French glam rockers Pleasure Addiction provide for their music and they are right on the money. I have to confess that I have been playing this album quite a bit during the last few weeks and find that it is a worthy contender for “top ten album” of the year. As it turns out, Pleasure Addiction is sort of an all-star band. Singer Butcho plays with Hellectrokuters whose 2012 album Rock N Roll Beggars landed the number two spot on Sleaze Roxx’s Top Ten Albums of 2012. I can’t say that I recognize the names of some of the other bands — Aesthesia, High-School Motherfuckers, Voodoo Smile or Suckerstarz — that the rest of the members have been or are in but based on the music played by Pleasure Addiction, I will be checking out what these bands have to offer in the near future.

Pleasure Addiction play a brand of melodic, catchy and upbeat ’80s laced glam metal which is hard not to enjoy. In some ways, it is quite amazing to hear lead vocalist Butcho front this band given that Hellectrokuters play and sound like an AC/DC inspired type group. Carvin‘s guitar licks have that a real ’80 feel to them without the outdated ’80s production. The rhythm section of bassist Stuffy and drummer Pamyx sounds very solid and tight. Based on the list of bands that those two have played in, it appears and sounds like that they have been playing together for quite a number of years. The music is straightforward and simple, and reminds me a lot of Poison‘s debut album Look What The Cat Dragged In in a lot of ways. My favorite tracks on Extra Balls — which is a very Steel Panther like album title — are the catchy “Love Refugee” and the grittier “Dr Addict” which not surprisingly given its title has some strong Motley Crue influences. Personally, I enjoy songs a tad sleazier and grittier than what Pleasure Addiction offer so I wish that more songs on Extra Balls had that sleazier edge found on “Dr Addict.” All of the tracks on Extra Balls are good ones except the ballad “Heaven & Hell” which I find a bit on the dull side. Hey, I have never been a big ballad guy so probably tend to judge ballads a tad harsher than others.

Overall, Pleasure Addiction deliver a strong glam metal album that deserves your attention and ears. I am looking forward to hearing what Pleasure Addiction come up with next. It seems that the Extra Balls album is not that available as per the usual channels so I suggest contacting the band directly via Facebook if you are interested in purchasing the album.

Production:
Recorded and mixed by Suicide
Mastered by Harry Hess