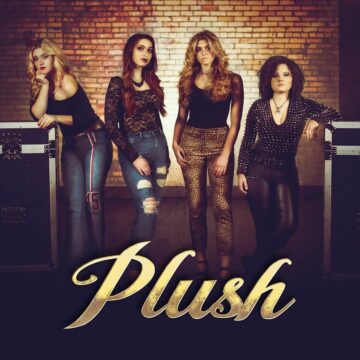 Review:
It’s safe to say we need a refreshing sound in today’s hard rock/metal scene; something new, something different. Lucky for us, we have just that in Plush, a hard-rocking band featuring talented young female musicians consisting of singer Moriah Formica, guitarist Bella Perron, bassist Ashley Suppa and drummer Brooke Colucci. Plush, who have received praise from stars such as Michael Sweet and Ace Frehley and have already toured with acts such as Mammoth WVH, released their debut self-titled album on October 29th.

Formica immediately stands out as beyond impressive. Still in her early 20s, her voice can be best described as a mixture of Lzzy Hale and Nancy Wilson, but her range and power behind it is what will draw more ears to Plush’s sound. Out of the many tracks on the album, the anthemic “Champion” and “Hate”, the first single from the album, showcases her voice best.

This isn’t a one-woman show by any means. The other members bring their own flare to the group to give Plush character. Examples include the fantastic harmonies offered by these ladies, which you can listen for on “Found A Way.” Perron obviously has an ear for top-notch riffs, which can be spotlighted on the record’s second single, “Athena”, and “Will Not Win”, featuring the heaviest guitar work on the album. Suppa and Colucci are one hell of a unit for the rhythm section, with perfectly fit bass lines and strong drum patterns and fills, as shown on the track, “Bring Me Down.” With the maturity of the content in the lyrics, the songwriting in the group is already experimenting with sharp emotions and subject matter that anyone can relate to. For a straightforward example of that, give “Sober” a listen.

When it’s all said in done, Plush delivered. Put aside the “rock is dead” bull because with groups like these ladies, especially as young as they are, rock is alive and well. With killer vocals, ripping guitar and a machine of a rhythm section, Plush proved themselves with their debut self-titled record that will please any hard rocker and metal head.