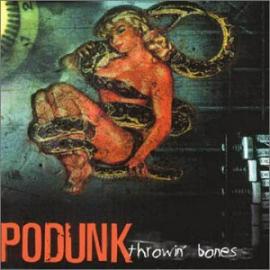 Review:
In early 2004 I went to see Tesla live at the Dodge Theater in Phoenix, Arizona. Most times a “hair” band has a lesser known “hair band” open up for them, if not, they use some local band that usually sounds like hell. When I heard the name Podunk, I immediately thought the latter would be true. Boy was I wrong!

It’s difficult to describe the Podunk sound. It’s not exactly heavy but it’s also not exactly elevator music. They have a bluesy sound with clear southern rock influences – they are from Texas after all. But they oddly fit opening for a “hair” band like Tesla as they clearly have roots in the “hair” style as well. I guess the thing I can say about their sound that is definitive is, “These guys ROCK!”

My favorite song off this album is the opening cut, “Wings.” Man, what an uplifting tune. Every once in a while you hear a song and you know exactly what the artists were thinking when they wrote it. This song speaks to me very strongly.

Songs like the above mentioned “Wings,” “Ditty,” “Boomerang,” and “Summer Song” really make you tap your toe and sing along. The guitar hooks are strong and the lead singer’s incredible voice (he sounds much like Eric Martin from Mr. Big actually) really blow me away. “Dashboard Mary” is another great song off the album. It is a song, like “Wings,” that would get air play in a perfect world. But in an era where music has to be so soft and formulaic it puts you to sleep or so heavy the singer is screaming bloody murder, a genuine rock band simply gets lost in the mix. Us rock fans are out here hungry for new rock like this to be given a chance but for whatever reason we are forced to suffer through shows like Making The Band and American Idol to manufacture bogus pop stars who enjoy their 15 minutes of fame and disappear into the black abyss of obscurity once that time is up. But that does not mean a new style is able to slip through that window of opportunity! They simply
manufacture more flavor of the month pop stars and we eat it up like an Ethiopian at Willy Wonka’s Chocolate Factory. I say we should reward originality and creativity. Podunk is very original.

So, will these guys ever hit it big like the bands they’ve toured with in King’s X and Tesla? Honestly, I doubt it for the reasons mentioned above. But if you are thirsty for quality rock ‘n’ roll in an era devoid of true rock, look no further than these country boys. I hope they come around the Phoenix area again, I’d love to catch them now that I know some songs!