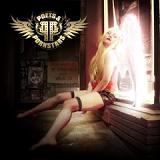 The opening track of the CD really sums up the entire album, simply put this is “rock and roll”. The music isn’t flashy or self-righteous, it just delivers, time and time again. “Rock And Roll” is a killer start and could easily have appeared on a Little Caesar album while “Get Your Kicks” excels in the same way Primal Scream‘s “Rocks” did. The band takes a dreamy power-pop turn on “Strange” before shifting back into no-frills rock mode with “My Devil’s Song”. The second half of the disc finds the group expanding their sound with varied results.