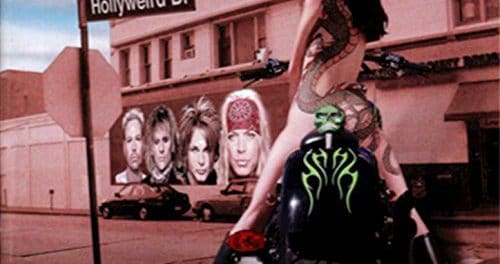 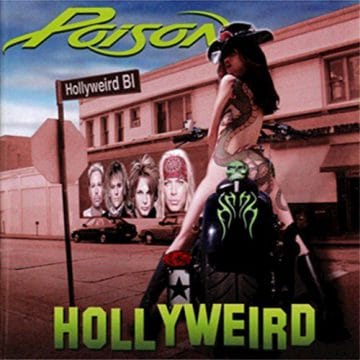 Review:
With Poison reuniting this year for their first tour in five years, it seems almost fittingly funny that if the band were going to celebrate any of their album anniversaries, it would be the 15th anniversary of the band’s self-released album Hollyweird, an album that ironically also marked the band’s first since reuniting with guitarist C.C. DeVille in 1996. While there certainly are some cool tunes on Hollyweird, I think I can say with much certainty that Bret, Rikki, Bobby and C.C. will not be doing any full album performances of perhaps one of the most underrated releases in the Poison discography.

Kicking off promotions nearly a year in advance of the album’s release with the single (and oddly enough the album’s bonus track) “Rockstar,” Poison returned with what could possibly be described as a hodgepodge of tracks that saw the guys back to the good rock and roll sounds of early hit albums Open Up and Say…Ahh and Flesh & Blood. For diehard Poison fans like myself, this was a welcome breath of fresh after a pair of more blues-based rock albums with guitarists Richie Kotzen and Blues Saraceno, ironically both more known in guitar magazines for their technical abilities rather than catchy three-chord rock and roll. But while this return to form produced some classic results, the changing times and perhaps Poison’s decision to release Hollyweird on their own label, would not result in a return to the massive sales of their earlier albums. To this day, some who were fans of the band early on have found delight in discovering an album they for years never even knew existed.

As a fan of Poison from the beginning (Look What the Cat Dragged In was a great cruise and crank release the summer of 1986 and I pretty much plucked Open Up and Say…Ahh! right off the back the truck when it was delivered to our local record store), I had already enjoyed the reunited band live and was more than ready to see what they could do with C.C. back in the mix. Yeah, maybe I was a different person than I was over a decade earlier when Flesh & Blood came out but a part of that included a dire need for good rock and roll to help provide a break from the doldrums of everyday life. I sure wasn’t gonna get that from the gloomy sounds coming out of rainy Seattle. Hollyweird, for all its timing and less than stellar production, provided that missed fun spark.

While the band has been quoted as calling “Shooting Star” a sort of sequel to earlier hit “Fallen Angel,” perhaps the tracks that most closely resemble earlier Poison classics are “Wasteland” with a bit of thematic nod to “Ride The Wind” and the “Unskinny Bop” like track “Get ‘Ya Some.” “Devil Woman” and “Stupid, Stoned, and Dumb” could have been outtakes or deep cuts from the Open Up and Say…Ahh! sessions and previously mentioned single “Rockstar” has so much Poison stamped on it that it would take a complete recluse to not pick it of a ’80s rock radio line-up.

Where Poison hurt themselves the most here is with the way they kicked off the album. “Hollyweird” is bit gritty to grab the average Poison fan and pull ’em in for the long haul and while the band’s take on The Who’s “Squeezebox” is pretty cool in a way that only Poison can pull off, it still is not quite what Poison fans know and love. By the time the album gets around to the first standout track “Shooting Star,” one could easily see why fans would already be bored. To follow it up with what in my opinion is the weakest track on the album in “Wishful Thinking” only puts the listener in an odd place to ask them to try and soak in a pair of oddly placed C.C. DeVille fronted tunes. While I personally dig “Living In The Now” and especially “Emperor’s New Clothes,” asking a fan totally in love with the first three Poison albums to dive into the first music from the original line-up in years by throwing a couple of oddly-placed C.C. tunes at ‘em is kinda like Sebastian Bach rejoining Skid Row for a new album featuring a couple of tunes sung by Rachel Bolan. Cool… but not for the first album back together. It’s also my opinion that the album could have also benefited from the absence of the pair of “Home” tracks dedicated to C.C. and Bret. The other eleven tracks provided serve well (even the C.C. stuff) to provide a nice return for fans if at least sequenced differently.

Let’s be totally honest here. The music of Poison was never intended to end world hunger, war, poverty or anything remotely life changing on a massive level. Poison’s music is a beautiful, fun break from all of the bleak realities of everyday life. A reminder that despite all of its ills, life can be good and worth living. If that’s even all you look for in a Poison album, Hollyweird easily makes the grade. If you are looking for something world changing… well then, maybe you weren’t looking for a Poison album in the first place. Well, that or your fave Poison album is maybe “Native Tongue.”

Reviewed by John Stoney Cannon for Sleaze Roxx, May 2017