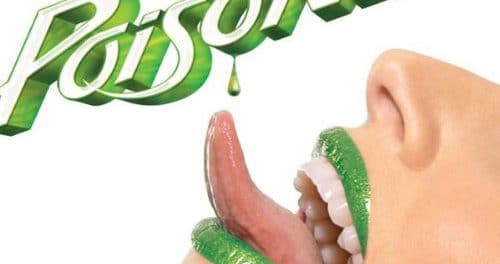 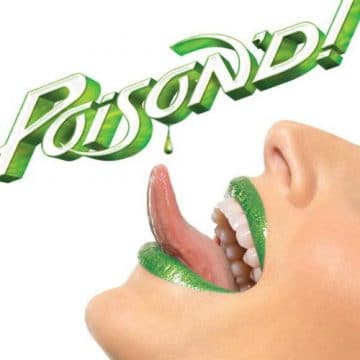 Review by John Stoney Cannon (June 2017):
When Poison came together in 2006 after a year off to release a Best Of CD and tour in celebration of 20 years of rock and roll, it certainly wouldn’t have surprised anyone if the plan was to kick the rock world in the ass one last time before going out on top. Poison were everywhere and in addition to fall reissues of the band’s first three classic albums — Look What the Cat Dragged In, Open Up and Say Ahh! and Flesh & Blood — the band was visible via C.C. DeVille’s foray into reality television a la VH1’s The Surreal Life and a Billboard Top 20 showing for the first time in 13 years courtesy of their 20 Years Of Rock compilation. Little did anyone know that despite some personal issues along the way, Bret Michaels, Rikki Rockett, Bobby Dall and DeVille were just sparking a few flames that would lead to more music, touring, and reality TV the following year.

Released on June 5, 2007, the covers album Poison’d would find itself snug in the middle of a three year span where the band would release no less than four compilation CDs including a couple of live offerings, the 20 Years best of platter, and 2007’s ode to some of the band’s favorite classic rock tracks. This would be the closest Poison would come to a “new” release for the next decade with the fans having to settle for almost five more hits compilations and a pair of box sets. But just how “new” was Poison’d, actually?

Starting 2007 off with a message for the fans on the band’s MySpace page (a sort of precursor to Facebook), Poison requested suggestions for classic rock tunes to cover for an upcoming release. Call it a covers album, tribute album whatever. Looking back now, one has to really wonder how much stock was really taken in the fans’ suggestions. And truthfully, how many fans actually responded whole-heartedly? By 2007, cover albums were pretty much a dime a dozen, most being merely contractual fodder for bands wanting to quickly fulfill their obligation of a release to a record label. And how much time and attention was the band really planning on giving such a project? With a summer tour with Ratt planned and Michaels suddenly on one of television’s biggest shows a la Rock Of Love, fans would have to be excused if they looked at a CD of covers as simply a way of throwing some sort of product out for public and promotional consumption. They would have to wait until June to see just how right some of them were.

Comprised of eight new tracks recorded with producer Don Was (nine if you count Wal-Mart exclusive cover of Justin Timberlake’s 2006 track “SexyBack”) and five previously released songs, Poison’d is kind of like taking a band vanity project and splicing on tracks from a Deadline Records compilation CD. You know the ones that have the songs made up of name hard rock artists covering other artists material, some remixed in industrial style? Well… luckily, Poison stopped short of any industrial mixes. At least this time, and while relatively clean and slightly punchy, it is obvious by the meager production that Poison’d was not designed with any sort of sizeable investment in mind.

Right off the bat, the guys give a nod to a trio of expected influences with fun covers of classic tracks by The Sweet, David Bowie and Alice Cooper. What is possibly unexpected here are the song choices as the obvious direction would have been to rock out tunes like “Ballroom Blitz” and “Schools Out” but thankfully Poison go full on fun by kicking off with Sweet track “Little Willie” and Bowie’s “Suffragette City” (slightly more expected) before taking a full on left turn into 1976 with the Alice Cooper ballad “I Never Cry.” Luckily for Poison, if any tune on this compilation is tailor made to be covered by them, it’s possibly this one. But it does have to be said though, that while it’s cool to see Poison jump out of the gate with these great ’70s glam tracks, they don’t come close to touching the tracks on Rockett’s 2003 release Glitter 4 Your Soul (re-released in 2008), which stands as perhaps one of the few covers albums I enjoy listening to on a regular basis.

If an Alice Cooper ballad would be considered unusual, one must wonder what fans thought hearing the tracks that followed. While classic rock radio is filled with classics that have been covered by tons of bar bands over the years, and Poison in their early days were surely no exception to the cover band rule, I wonder how many listeners actually expected to hear them take on tunes by heartland style rockers Tom Petty and the Heartbreakers (“I Need to Know”), southern rock a la Marshall Tucker (“Can’t You See”), Rolling Stones style country music (“Dead Flowers”), plus new wave by the likes of The Romantics (“What I Like About You”) and The Cars (“Just What I Needed”)? For some, I would have to imagine this was a breath of fresh air and definitely going in the unexpected direction the band had announced prior to the album’s release. But if the first eight tracks weren’t enough to satisfy Poison’s fans, the rest of Poison’d wasn’t going to provide any sort of relief.

Made up of songs from a variety of previous releases including soundtracks, compilations, and reissues, the final five tracks on Poison’d pretty much just adds the majority of the band’s remaining covers output through the years to essentially make up a disc dedicated to the history of Poison covering other artists. Their rendition of the KISS classic “Rock & Roll All Nite” was featured on the soundtrack for brat pack drug and gloom movie Less Than Zero, while their version of The Who’s “Squeezebox” is taken from hodgepodge original 2002 release Hollyweird (which I reviewed earlier this month). The remainder of the tunes are lifted directly from CDs released the previous year — “You Don’t Mess Around with Jim” (Jim Croce tune released as a bonus on the Look What the Cat Dragged In reissue), “Your Mama Don’t Dance” (Loggins & Messina cover contained on the Open Up and Say Ahh! reissue and Best Of: 20 Years of Rock) and Grand Funk Railroad song “We’re An American Band (Best Of : 20 Years of Rock).

While I don’t think that too many would argue the fact that Poison’d is far from a masterpiece, I think it is fair to say that as far as music to crank on a chill summer day, it’s not horrible. Die hard fans might disagree and rightfully so but as far as a bargain bin or Goodwill store pickup? If I didn’t already have a copy in my collection, I might be so moved to grab a used copy for a buck or two. But given the choice, I’d prefer to have a mixed CD of the tunes done by the original artists or… I’d just easily take it back 20 years and pop in Look What the Cat Dragged In.

And well… maybe they did kinda squeeze in one of those industrial mixes with that Timberlake cover. Shucks!

Review by Skid (May 2007):
As soon as I heard that Poison was working on a covers CD, I immediately thought of “Squeeze Box” from their Hollyweird album — that song paled in comparison to the original Who version. Hell, it even paled to Roxy Blue‘s rendition! So understandably I wasn’t holding my breath in anticipation of Poison’d, but my curiosity got the best of me and I decided to see if this new Poison CD would be as horrible as I envisioned.

As suspected, this album isn’t blowing me away — but it also isn’t forcing me to run to the washroom and vomit. As with any covers album, the record is only as good as the songs chosen. Some of the songs Poison have picked out match their party-glam style perfectly, and others just don’t match what-so-ever.

For instance, Sweet‘s “Little Willy” is perfect for Poison, and was likely a huge influence on the band when they were young. “What I Like About You”, originally performed by The Romantics is another song that seems to suit these ’80s glamsters well. On the other hand, will Poison fans actually want to hear Bret Michaels imitating David Bowie during “Suffragette City”? Alice Cooper‘s “I Never Cry” won’t impress anyone who has heard the original, and may even disappoint the ballad fans.

There are a couple songs presented here that work really well, and they are ones you wouldn’t have expected Poison to be able to pull off. Tom Petty‘s “I Need To Know” and The Marshall Tucker Band‘s “Can’t You See” work surprisingly well. But once again on the flip side, a song like The Cars‘ “Just What I Needed”, which one would think would be perfect for Poison, comes across as stale and uninspired.

Some of Poison’d works and some of it doesn’t. But the real question is, is this CD a worthwhile purchase? I’m sure Poison fans will find enough here to keep them happy, but there is nothing here to convert the naysayers. And KISS fans will be up in arms over the glam-pop version of “Rock And Roll All Nite.” Poison’d isn’t as bad as I had imagined, then again you won’t find me waiting in line when it gets released on June 5th.

Poison‘s “What About You” video:

Music video by Poison performing What I Like About You.