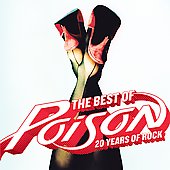 Review:
Although Poison has released a greatest hits package before, they have done it again with 20 Years Of Rock, this time adding a few songs that may not be as well known or fan favorites for the listening rock fans. With such classic songs as “Talk Dirty To Me” and “Unskinny Bop” you can’t help but remember the teased hair and ripped jeans that made you feel cool as you listened to those songs, but make you laugh now when you think of ever doing that.

With the louder upbeat songs come the ballads that kept your relationship together, or gave something to that breakup that you wished never happened. Included in this set are the truth filled, heart-breaking ballads that made Poison one of the greatest ballad producing bands of their time. “Every Rose Has Its Thorn” and “I Won’t Forget You” brings you back to those times as well, when you danced your first slow song at prom or when you asked that special girl to marry you, or the time when you said your last words to the one that got away.

For a special treat this album includes some songs that were not on albums before. “Rock And Roll All Night” is a song that they did for the soundtrack Less Than Zero, a song I wasn’t aware that they redid, but I must say it’s a catchy song that they made their own, which makes it even more special to have on this album. Another song that they do a cover of is “We’re An American Band”; a Grand Funk Railroad classic that fits Poison so well. It tells the story of the band, even if it isn’t an original. The song goes so well with Rikki, Bret, C.C. and Bobby‘s playing and performing. It’s like they have sang the song since they started.

All together this album is a great mix of the bands success and the life of the band as a whole. The album brings together and gives a history to those that have known the band through the years and brings to life a band to those that are just discovering Poison for the first time. Listening to this album will bring back memories from the good times and will also create new memories as you listen to it again.