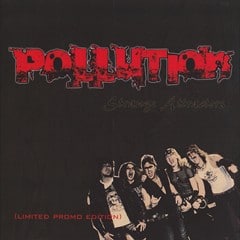 Review:
Italy is quickly becoming the second Sweden, and Pollution is one of the latest to emerge from the boot-shaped country. Forming in 2003, Strange Attractors is the band’s first full-length album, and while it doesn’t always work it does contain a few interesting compositions.

One of the biggest hurdles when listening to Pollution is Francesco Rolla‘s voice — like several other Italian groups his accent carries over into the music and can take some getting used to. Add that to the fact he has a really unconventional voice, occasionally displaying an Axl Rose influenced shriek, means that not everyone will be able to get into this CD (sometimes it is even too much for me).

Musically I have no complaints, as the band members play sleazy metal very well and when the vocals are reined in Pollution creates some cool music. “Raining Diamonds” is one of those songs that works, thanks in part to its rapid fire drumming — the vocals are entirely over-the-top, and mixed with an impressive driving rhythm, make for a unique and interesting song. “Red Hole” and “Fearful” on the other hand are slightly more reserved, but turn out pretty good. The oddly titled “A Shot Burn And Kill’em” is probably Pollution at their best. Once again Francesco Spogli shines with his heavy beat and the other band members latch onto his groove for a great rocking number.

If you can get past the high shrieks and blood-curdling screams you should be able to enjoy Pollution. I prefer a gruffer vocal approach myself, so at times Strange Attractors got on my nerves. The accent sometimes rubs me the wrong way as well, but this isn’t a problem reserved for Pollution — it is something that plagues many bands from Italy. I have to give the guys credit for sticking to their guns and delivering a sleazy CD — and unconventional singers sometimes pique the record buying public’s interest. If this sounds at all interesting to you give the band a shout on their MySpace page for purchase information.