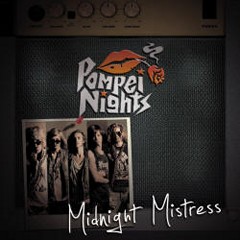 Review:
Sweden continues to be the hard rock capital of the world, and the latest upstarts driving that point home are Pompei Nights. Their full-length debut is due later this year on Street Symphonies Records, but until that time they have released a two song single to give listeners a taste of what is to come.

With Crashdiet guitarist Martin Sweet handling production details the young guys of Pompei Nights have a nice clean and professional sound. However these guys aren’t Crashdiet clones — there are enough of those out there — instead they sound a lot like Australia’s Hansel. Minus the tongue-in-cheek looks and silly outfits that turned some people off Hansel, Pompei Nights appear to be taking themselves seriously all the while retaining those catchy-as-hell choruses. It is the type of ‘big’ sound that Crazy Lixx is finding success with, keeping things memorable without resorting to gimmicks or outrageousness. The two songs here are interchangeable, but both are great slabs of glam influenced rock.

This single release may just be a teaser until their full-length debut comes along, but what a way to introduce a band! If Pompei Nights can write ten songs that sound like these two they will be exactly what fans of fun glam and melodic rock will be looking for — not to mention one of the hottest bands in Sweden.