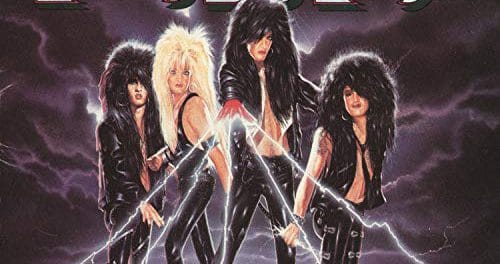 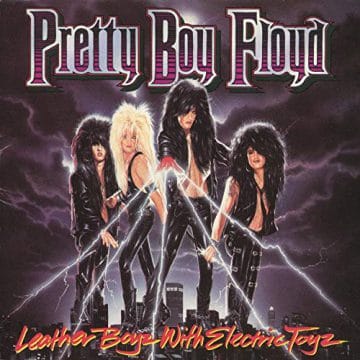 Review:
In the late eighties, I suddenly found myself buried in an unplanned life filled with a ton of anger, frustration, depression, and despair. Heck, at one point, my daily existence consisted of living in a failed business far from home with only daily manual tasks to get me barely enough money to get by and slowly, I lost enough weight that I was barely able to function. I became so bitter that eventually buying food took a back seat to buying cassettes at Lakeland, Florida’s Specs Music location because while food may have been the substance I needed to live, rock and roll was the only substantial thing keeping me alive. If not for the spark of the music, I truly believe I would have let my fire go out. And while a lot of it was crap, there were a few like Pretty  Boy Floyd‘s Leather Boyz With Electric Toys that were filled with anthems perfect to lift, inspire, and fire up any rocker within earshot. Yeah, food was giving me the energy to get to the next shitty day. Music was giving me just enough desire to get THROUGH it.

I think what first snagged me about Pretty Boy Floyd‘s debut was the ultra cool, colorful, cartoon cover. Yeah, my world then was bleak and void of much color and any chance to light it up was desperately welcome. The cover of Leather Boyz With Electric Toys could at least for a moment take me back to the days when I could get lost in the art of The Move‘s 1970 album Shazam or any early KISS record like Destroyer or Love Gun. Even the song titles were very KISS-like and I guess to no surprise — while Pretty Boy Floyd looked and sounded more like Too Fast For Love era Mötley Crüe, they were heavily influenced in part by KISS.  And while this lifelong KISS Army soldier was digging Hot In the Shade (which would come out nearly two weeks after Leather Boyz With Electric Toyz), the battle for life required some new updated, charged up musical weapons and Pretty Boy Floyd‘s debut was loaded with, well… highly charged electric toyz.

Slamming out with the title track, Leather Boyz with Electric Toyz was a nice breath of sweaty fresh air sent from the smoggy Sunset Strip and loaded with that smokey bar badassness ’80s sleaze rock fans fell in love with while lacking the generic content that had begun to overtake the glam scene. Much like rap where suddenly every one with sneakers and a mic thought themselves a hip hop genius, it seemed like every wannabe bad boy with his sister’s hairspray and makeup had figured they had the tools to be a rock star. I even recall around that time a tall skinny made up rocker at a local glam show informing me that “If Bobby Dahl can become a rock star, than dude, I can too since I know the same three bass chords he does and I got cooler hair.” Needless to say the “dude” is like an auto mechanic or something and hasn’t even seen a bass in decades much less thumped out three chords on one but… back to Pretty Boy Floyd. If you don’t believe me, rewatch The Decline of Western Civilization Part II and count how many “I know I’m gonna make it” unknowns actually… well made it.

Leather Boyz With Electric Toyz kicks out of the gate hard with a blistering title track that could be considered Pretty Boy Floyd‘s “Live Wire”, the scorching anthem that introduced Mötley to the world a few years earlier. Matter of fact, from frontman Steve Summers‘ voice to the raw punk-tinged guitar of Kristy Majors buzzing over the simple to the point back groove provided by Vinnie Chas and Kari Kane, the early Crüe influence is all over the place. Pretty Boy Floyd even go so far to cover obscure early pre-major label Mötley with their own killer version of “Toast of The Town.” Hell, I even suggested to anyone who would listen that when Vince Neil and Mötley went their separate ways, Summers would have been a great replacement. Yeah, I could always hear him belting out old Crüe tunes.

But the heavy stuff isn’t the only place the influence can be found. The beginning of “Wild Angels” is very similar to tracks like the Crüe‘s “Merry Go Round” while “Only The Young” and “I Wanna Be With You” fall in line wonderfully with later melodic Mötley tracks. Maybe that was part of the appeal of Pretty Boy Floyd. Just a month earlier, Crüe released the huge Dr. Feelgood album and the world was all about every facet of the band’s sound perhaps making Pretty Boy Floyd‘s initial crack into the mainstream partially the product of good timing. But whether a direct rip off or not, Electric Boyz With Electric Toyz is still a great package of catchy, fun, energetic anthems that to this day still sound great on record and on stage. For those who still raised a fist “Rock And Roll (Is Gonna Set The Night On Fire)” was (and still is) as uplifting an anthem as ever was just as “Forty-Eight Hours” and “Your Momma Won’t Know” stand as perfect soundtracks to a loud, sexy, wild time.

While Pretty Boy Floyd‘s debut was far from groundbreaking, it still stands as a great rock and roll record filled with every emotion young fans were feeling at the time or at least, were wanting to feel. From young angst to young love and every excited, wild, loud, angry, happy, nervous, horny, young emotion in between, it’s all there in simple good rock and roll. A soundtrack for “Rock And Roll Outlaws” and “Wild Angels” as well as boys in hairspray and makeup and the girls who love ’em. Blending the raw energy of early Crüe, the sing-a-long anthem style of KISS, and the fun rebellious party rock attitude of Poison, Pretty Boy Floyd, if even for a short moment, hit upon a cross section of hard rock that was hitting its commercial peak.

In 1989, I was a few years removed from my teen years but still in dire need of the motivation to tackle life at its fullest. I still felt in many ways like I deserved a spot in that club reserved for “Only The Young.” That place where “Wild Angels” flew in unison.  Where rock and roll was still king and the religion of the faithful. That place where boys could still be boys… leather boyz… with electric toyz…

Pretty Boy Floyd‘s “Rock And Roll (Is Gonna Set The Night On Fire):

Pretty Boy Floyd‘s “I Wanna Be With You” video:

PRETTY BOY FLOYD- I WANNA BE WITH YOU HQ Sound(OFFICIAL VIDEO).

PRETTY BOY FLOYD- I WANNA BE WITH YOU HQ Sound(OFFICIAL VIDEO).