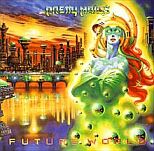 Review:
Future World was the third release from the Danish quintet known as the Pretty Maids. To put it quite simply, this album rocks! Songs like “Future World”, “We Came To Rock” and “Loud ‘N’ Proud” really jam, while cuts such as “Love Games” and “Eye Of The Storm” show the bands softer side.

The playing throughout the album is very strong. I’m glad that the band is still together and putting out new music, I hope one day they the recognition they deserve. I give Future World two thumbs up!