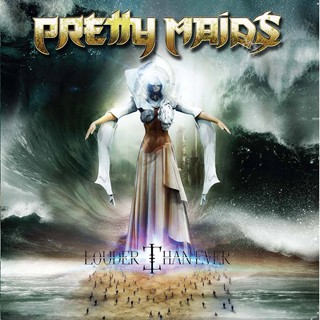 PRETTY MAIDS
LOUDER THAN EVER
Released on March 21, 2014 (Frontiers Records)

Review:
Warning — this band is not for the ultra religious. There are lots of lyrics on this album that sponsor atheism and flat out rejection of Christianity. That being said, Louder Than Ever is awesome — it’s gritty, heavy, and powerful. Singer Ronnie Atkins has a very good voice, and the album is full of vocal harmony backups. While I had personally never heard Pretty Maids before, even though they have been around since 1981 and have been wildly popular in Europe, Louder Than Ever is their thirteenth album — consisting of seven re-recorded classics and some tracks recorded specifically for this release.

Several members of Deep Purple have guest appeared on a previous Pretty Maids album, which makes sense as you can definitely hear Deep Purple‘s influence within the music. The first song, “Deranged”, hooked me in despite the lyrical content. I dig this type of metal — heavy, melodic, and full of keyboards and intricate guitar and I can’t get enough. It’s not all heavy though, there is an upbeat ballad called “My Soul To Take” that has a very modern commercial feel to it. I can hear the song being played on the radio in rotation with Disturbed, Breaking Benjamin, etc, but don’t worry, the next track, “He Who Never Lived”, slams back into the heavy melodic art that I enjoy.

I write reviews live as I listen to the album, that way my writing is fresh — the first time I hear something. But as I get deeper into Louder Than Ever I am more and more impressed as the songs get more and more intense. For example, “Tortured Spirit” is different from anything else on the album. It’s epic, heavy, the keyboards are like an ethereal presence that is haunting the guitar, and the vocals fit the emotional title. The emotion and the feel of the song complement the music like a tight leather glove. “Nuclear Boomerang” starts off with an apocalyptic instrumental, overlapped with news audio from WWII shortly after the US dropped the bomb on Hiroshima, and the song then explodes in similar fashion. “Snakes In Eden” in turn expands on the onslaught, and gets even heavier.

Overall, Louder Than Ever is everything that power metal should be. The talent of Pretty Maids is equal to all the other bands from Europe that I’m discovering, and that says something. The majority of bands from Europe are loaded with talent, and display it proudly with their own unique styles. However, in the U.S.A. (as far as signed bands) they all sound the same — there is so much more a band can do when they aren’t just strumming four chords and yelling. The Pretty Maids prove this, so I suggest you get Louder Than Ever.