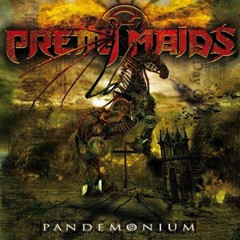 Review:
The Pretty Maids, a hard rock band from Horsens, Denmark, was formed back in 1981 by singer Ronnie Atkins and guitarist Ken Hammer — the two mainstays during the band’s 30 year run. The band’s sound and music can best be described as classic riff heavy rock with melodic AOR appeal.

Success has eluded the Pretty Maids in the United States through the years. In 1987, when they issued their Future World album, they had a big name producer in the legendary Eddie Kramer, great songs, a video on regular MTV rotation (for the track “Future World”, which you can still catch from time to time on VH-1 Classic’s Metal Mania) and a major label. Sadly, even that wasn’t enough to break the Pretty Maids into the American market. I lost track of the band after that and it wasn’t until I picked up a copy of 2006’s Wake Up To The Real World that I realized the group was still active.

After a lengthy hiatus, Atkins and Hammer are back with their latest offering Pandemonium, which is a continuation of the riff oriented, keyboard accented melodic rock that fans have come to expect from the Pretty Maids. The songs are strong, the production is bombastic and musically the CD is good on the ears — there isn’t a dud on the album in my opinion. The standout tracks on Pandemonium are the title-track opener which sets the tone for the album, “Little Drops Of Heaven” and “Final Days Of Innocence” — on the later the Pretty Maids should be paying royalties to The Who.

Former King Diamond bassist Hal Patino replaced Kenn Jackson shortly after the release of Pandemonium. Regardless, the Pretty Maids are an underrated hard rock band that still deliver 30 years into their storied career.