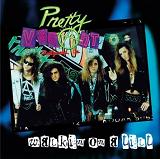 Review:
With a name like Pretty Vacant I thought this was going to be quite a punk sounding CD (punk not being my favorite genre), but Pretty Vacant aren’t especially punk. For sure you can hear some punk influences in songs like “Anything Goes” and “Shoulda Said No” but its more the bouncy, fun side of the punk attitude, mixed in with glam. What Pretty Vacant actually is is more glam rock straight off the Sunset Strip and this particular sleaze rocker likes that!

The opening track “Welcome Home” is a perfect melodic rocker which I could listen to time and time again and not get tired of. It has a catchy sing-along chorus that gets you hooked. I always expect (rightly or wrongly) that the song a band chooses to name their CD after to be one of their best, and the song “Walkin’ On a Tilt” doesn’t disappoint. It’s another great one that gets stuck in your head.

If you aren’t a big fan of ballady-type songs in general, try “Shine” – it’s a nice song that is worth a listen. It showcases how this band really meshes together, vocally with great harmonies, and musically with great chemistry. Lead singer Kenny Vacant has a wonderful voice with the talent of sounding quite different, quite a lot of the time, which keeps you interested.

The weaker tracks on Walkin’ on A Tilt would be “Turn of the Sun”, it’s just too pop sounding for my liking, and “Slow Day” is just, well, slow and dull. But with 15 tracks on this disc, and without reviewing each one, suffice to say most of these are gems. Even the demos are pretty good, especially their “Mystery Tour” cover.

This isn’t hard and heavy stuff. Pretty Vacant, on their myspace, describe their music style as powerpop/glam. Powerpop isn’t a term I’m familiar with, but if this is what they call powerpop I am now a fan of it! Suncity Records have once again brought another great band out of obscurity. Check them out to get a taste of something ‘Pretty’ good.

Review:
Pretty Vacant is another rock ‘n’ roll band that just quite didn’t make it big in the ’80s. Their music was an underground phenomenon but never commercially successful. Walkin’ On A Tilt is a well balanced record, full of Motley Crue rock ‘n’ roll tunes as well as Skid Row power ballads.

Songs such as “Slow Day” and “Born 2 Lose” have powerful guitars and pounding drums. “Shine” is a classic example of a ’80s power ballad, with acoustic guitars and meaningful lyrics. Singer Kenny Vacant‘s voice is very powerful and sounds good all throughout the record. There are also a few demos from the band such as The Beatles cover “Mystery Tour”. Just about every song starts off with a hammering drum beat which gets your foot tapping all through the songs.

Walkin’ on A Tilt is a record worth picking up, full of great songs with pounding drums and loud guitars. If you enjoy ’80s bands like Dokken, Skid Row or even Guns N’ Roses, Pretty Vacant are pretty much for you!