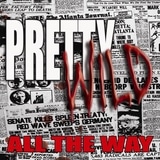 PRETTY WILD
ALL THE WAY
Released on February 18, 2009 (Swedmetal Records)

Production:
Produced and mixed by Krizzy Field and Martin Sweet.

Review:
The good folks at Swedmetal Records sure know how to pick some gems out of the pretty impressive (mainly Swedish) ‘sleaze invasion’! Pretty Wild is a 4-piece band which formed in 2006 and since then they have earned their reputation as a constantly evolving rock’n’roll machine on various stages on both sides of the ocean. All The Way is sort of an appetizer for their upcoming debut album which will be released later this year. And man, after hearing the six (plus a live version of “Dangerous” and a revamped “Let The Good Times Roll”) songs on this disc, I am awaiting it eagerly!

All The Way kicks off with the title track, which reminds me of the legendary Roxxi, who released a fairly unknown album back in the day. Roxxi remains the closest comparison I can think of throughout the whole disc, although Pretty Wild sounds fresher and a bit rawer. This is definitely music to crack a beer open to and sing along with, so basically the kind of sound every reader of Sleaze Roxx should enjoy! Krizzy Field seems to sweat out tasty riffs without any problems throughout the whole disc, and is probably best executed in the powerful “Dangerous” and the up-tempo “Shockin’ Teen”.

Each song on All The Way is a winner and a must-hear for every fan of Danger Danger (Screw It!), Poison (Flesh & Blood), the already mentioned Roxxi and similar bands. Add a dose of the brilliant Crashdiet and Crazy Lixx vibe to the mix and you get Pretty Wild.

Sound-wise this is also top-notch, as Crashdiet‘s Martin Sweet seems to have grown into a very good producer and does a great job, which especially shows in the backing-vocal arrangements.

This is how hair/sleaze-metal should sound in 2009, but this disc is much too short. Bring on the debut!