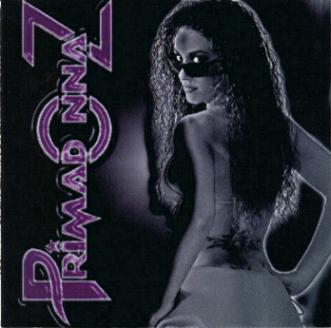 Review:
The Primadonnaz are a relatively new band from Philadelphia, complete with
outrageous makeup, leather, beautiful go-go dancers and a pretty cool enhanced CD.
The group would have easily fit into the late 80’s sleaze rock genre, which means
that like so many others, they would have been an incredible yet largely ignored band.

“Black & Blue”, the single, just begs to have the volume cranked to 11.
Dan Parsels has an incredible guitar sound going on here, while vocalist
Mikey Primadonna tries to steal the spotlight with his sleazy gritty voice.
As good as this tune sounds in the studio, it is even better on the accompanying live video!
“She Don’t Understand” is much the same, but with a slightly different vocal sound — in
fact they have a hint of Faster Pussycat to them. “Pure” is a slower more
melodic tune, while “Superstar” could pass as a Sea Hags number.

The disc finishes off with a cover of The Divinyls‘ hit “I Touch
Myself”. Now either this is a butchered attempt at this pop-song, or else it is a
tongue-in-cheek masterpiece. Everything here is so wrong, be it the screeching (bordering on
out of tune) vocals, the wailing guitars or the mental picture of the
Primadonnaz‘s appearing in the The Divinyls‘ seductive video (well both
lead singers do wear fishnets!). If the band is taking themselves seriously at all times,
we are in trouble — but if they are mocking the mainstream, then the album makes for
a very entertaining listen. Check the band out at primadonnaz.com;
I really enjoyed it and hope to hear more from them soon.