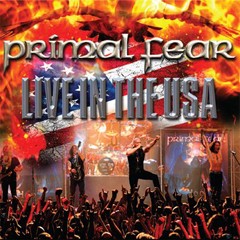 Review:
Primal Fear just wrapped up their North American jaunt to promote the Live In The USA CD and its accompanying DVD, 16.6 All Over The World. Primal Fear have all the ingredients for a band to make it in the United States — they have a Judas Priest like quality that makes them quite accessible for the U.S. market.

In short, Primal Fear are a contemporary power metal band with their roots in the New Wave Of British Heavy Metal. They are just melodic enough for hard rock fans to enjoy and just heavy enough to attract the thrash metal fans. For Primal Fear it has come down to obtaining a proper push from their label and Frontiers Records is giving them the proper exposure that a band of their caliber requires. I hope Primal Fear gains some much needed support so we can see them year in and year out in America.

Live In The USA features material from the band’s triumphant 2009 set at Progpower IX in Atlanta, Georgia. This recording is an accurate representation of what the band is about live and also showcases Ralf Scheepers‘ powerful vocals — he’ll send shivers up and down your spine, guaranteed. Purists will complain about the set list as it’s a bit heavy on the Seven Seals, New Religion and 16.6 (Before The Devil Knows You’re Dead) albums, but it is still a crushing performance none the less. The standouts on Live In The USA are “Battalions Of Hate”, “Sign Of Fear”, “Fighting The Darkness”, “Riding The Eagle”, “Killbound” and “Metal Is Forever”.

You can’t go wrong with Live In The USA — it is a great companion CD to Primal Fear‘s best-of compilation Metal Is Forever.