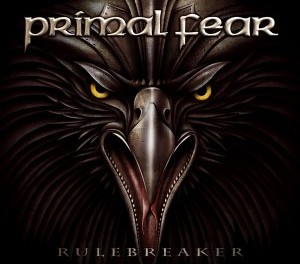 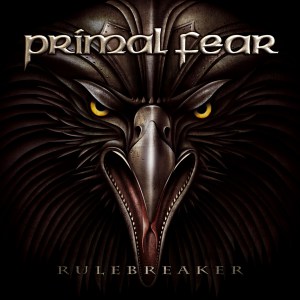 Review:
I still remember in ’98, when the Internet wasn’t what it is today and you couldn’t find out about every metal release instantly, Edwin, the guy who worked at my preferred music store back kept telling me: “I know you like Judas Priest, so you should most fucking definitely check out this new band. The singer is Ralf Scheepers whom you might remember from early Gamma Ray stuff.” And he pulled out their self-titled debut and proceeded to play it right then and there in the store. Suffice to say that after one song, I was hooked, bought the CD and took it home with me.

Fast forward 18 years to Primal Fear‘s 11th studio album Rulebreaker and the band is still delivering the same high-quality German power metal. Except for the two albums released during their transition from Nuclear Blast to Frontiers Music Srl (which are not bad, but not on the same level as all their others), every album they’ve released has ranged from very good to great. That is an extremely consistent resume that not many bands can claim to have.

Since that record label change and more specifically Magnus Karlsson joining the band — a man well known for outstanding compositions with killer riffs and incredible melodies — they’ve maintained a constant level of musicianship on their albums. My personal favourite from what I call the Frontiers/Karlsson era is Unbreakable. It is in my opinion where Karlsson‘s songwriting influence is the most present. Let me tell you that Rulebreaker comes fairly close to that same level. The album is full of magnificent riffs, catchy choruses and memorable melodies — one after the other.

All the songs are good but, as it is the case most times, there are some that stand out. “The End is Near” is a lovely metal anthem reminiscent of the best Accept songs. “Angels Of Mercy” is a killer straight forward power metal track. “Rulebreaker” is catchy as hell and one I’m looking forward to hearing live. “Bullets & Tears” sounds dangerously close to Judas Priest and even the ballad “The Sky Is Burning” displays some great metal attitude. The 10-minute “We Walk Without Fear” is another highlight of Rulebreaker with its many tempo changes encompassing a great example of everything the band is capable of.

Ralf Scheepers is an impressive singer. He possesses a great range and can hold high notes like very few. Anyone who’s seen them live knows that he’s just as impressive live as in the studio. The trio of guitars formed by Magnus Karlsson, Tom Naumann and Alex Beyrodt delivers a fierce attack all around. Matt Sinner does his usual great work on the bass and new drummer Francesco Jovino also carries his weight.

I’m very much looking forward to their North American dates, specifically the one in Toronto on June 1st. I’ve had the luck of seeing them live once before and they’re not to be missed. Rulebreaker adds more great songs to the band’s already impressive repertoire and like most of Primal Fear‘s material is a must for fans of classic heavy metal.

Primal Fear – “The End is Near” – Official Music Video

Subscribe here to get all the latest updates: http://radi.al/SubscribeFrontiers’THE END IS NEAR’ is taken from Primal Fear’s NEW ALBUM ‘RULEBREAKER’ AVAILABL…

‘ANGELS OF MERCY’ is taken from the 2016 album RULEBREAKER which is available on CD, CD/DVD (feat. TWO bonus tracks) and Digital formats. Get yours NOW: http…