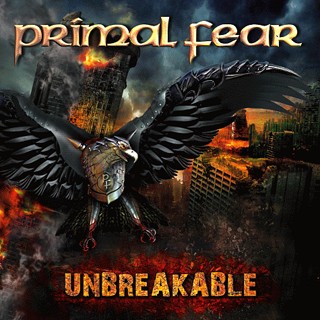 Review:
Primal Fear fans have been salivating like a pack of hungry wolves for the past few months in anticipation of the new album Unbreakable. On their ninth studio effort the German quintet return with a melodic, powerful, and memorable album. Primal Fear‘s last album, 16.6 Before The Devil Knows You’re Dead was heavy on epic anthems and showcased an overindulgent sound — it was well received by the band’s core fan base, but it certainly won’t go down as one of their shining moments. However, that record did afford Primal Fear an opportunity to tour the U.S. extensively, which they had not done in years.

Fans that have followed Primal Fear‘s career know exactly what to expect when they pick up one of their albums — similar to when you pick up a Motorhead, AC/DC, Slayer or Iron Maiden album. Since the release of the last album the band added Alex Beyrodt on guitar and he makes his first studio appearance here alongside Magnus Karlsson. The two complement one another brilliantly — that’s not to say that Henny Wolter isn’t missed, but they don’t lose anything either. Despite the change in line-up, Primal Fear‘s sound is untouched — you still get loud, distorted and melodic dueling guitars, Ralf Scheepers‘ powerhouse vocals and huge, booming drums. Keeping bassist Mat Sinner as producer further adds to the consistency of the band’s sound.

All strengths aside, Primal Fear‘s lyrical content continues to be a shortcoming — the best (or worst) examples of this are “Metal Nations” and the first single “Bad Guys Wear Black”. For as great as the band is musically, at times the lyrics are pedestrian at best. “Bad Guys Wear Black” is a tip of the hat to the rivet heads that have supported this subgenre throughout the years — the intention is honorable, however the lyrics are embarrassingly bad.

Unbreakable suffers a little from too much material, but it is an upgrade from the previous effort and could be the predecessor to 2005’s Seven Seals. Ralf Scheepers and company have righted the ship on this CD with tracks such as “Give ‘Em Hell” and “Strike”, two dynamic and energetic heavy metal songs that are made for the live setting. Primal Fear have also been known for their ballads and “Where Angels Dare” is another magnificent power ballad in a line of many.

Unbreakable is a return to form stylistically for Primal Fear, although some might say they’ve kept it somewhat safe here. Unbreakable will thrill those that loved the band’s Judas Priest and Dio influenced 1998 self-titled debut album through 2004’s Devil’s Ground.