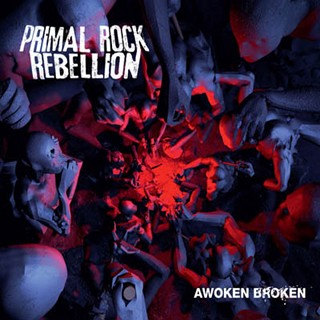 Review:
Primal Rock Rebellion is the latest project by guitarist Adrian Smith of Iron Maiden and vocalist Mikee Goodman of SikTh — and their debut album is entitled Awoken Broken. Before you ask, this band is nothing like Iron Maiden, or even like anything that Smith has done before. Primal Rock Rebellion instead is a contemporary metal band, not nu-metal — just good hook heavy metal.

I’m not familiar with Mikee Goodman, or any of his previous work, so I was very pleasantly surprised by his great vocal range — he sure hits some high notes and has the ability to stop on a dime and shift gears to a gritty, ferocious vocal all within the same song! There are several examples of this throughout Awoken Broken. Primal Rock Rebellion culls influences from gothic rock, traditional metal, and groove metal, and somehow it all works brilliantly without sounding forced and contrived. Adrian Smith takes full advantage of this deserved opportunity to take complete control of all the guitar duties and he shines throughout — he doesn’t overindulge with his new found freedom, he simply plays just what the song requires and doesn’t partake in any ‘guitar wankery’.

The standout tracks on the Awoken Broken are, “No Friendly Neighbour”, the surging rocker that opens the album, “Bright As A Fire”, which showcases the vocal diversity of Goodman vividly, “No Place Like Home”, featuring the catchiest chorus of all the songs on the album, “I See Lights”, which enters White Zombie territory, and “Savage World”, a power-metal song by way of Mudvayne.

I don’t know how Adrian Smith and Mikee Goodman crossed paths, but the chemistry is there and makes them a tandem to be reckoned with. Who knows if Primal Rock Rebellion will get the opportunity to tour behind Awoken Broken, but if they don’t let’s hope they at least get a chance to make a handful of live appearances — it would be a travesty if they didn’t.