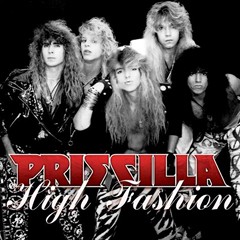 Review:
Picture a slightly heavier version of glam legends Poison and you’ll have a pretty good idea of what Priscilla is all about. It was the late ’80s when Priscilla made waves with their “Wake Up the Neighborhood” single, followed by opening slots for Pretty Boy Floyd and Hericane Alice, and here they are with their first official release some twenty years later.

High Fashion is a collection of old recordings, so the sound quality varies quite a bit. The demos in particular are very rough, which is too bad because the title track would have been a scorcher if it could have been cleaned up. It finds the band at their darkest, but the sound quality almost kills it. The first 10 songs are much easier on the ears thanks to producer Sean Beavan, who later made a name for himself working for both Nine Inch Nails and Marilyn Manson. Priscilla is the polar opposite of those bands however, sticking to party-hardy hair metal.

The band’s most popular song, “Wake Up The Neighborhood”, is pure ’80s glam. Legend has it that this single went on to sell 20,000 copies back in the day, which was a decent number back then and completely unheard of in the current musical climate — it definitely shows how things have changed over the last two decades. The Cleveland natives are at their best when they stick to the glam metal formula as they do on “Lick ‘N A Kiss”, “Can’t Wait For The Night”, “Some Like It Hot”, and the incredibly catchy “Broken Angel”. One thing I noticed about Priscilla is that they didn’t attempt many ballads, and judging by “Always Think Of You” that is arguably a good thing.

High Fashion hasn’t aged particularly well, but if you’re in the mood for some fun hair metal with lyrics drenched in sex, over-indulgence and more sex — or if you long for the days of teased hair and excessive make-up, to a time when Bret Michaels bathed in hairspray instead of covering everything with a bandana — then Priscilla will curb your cravings.