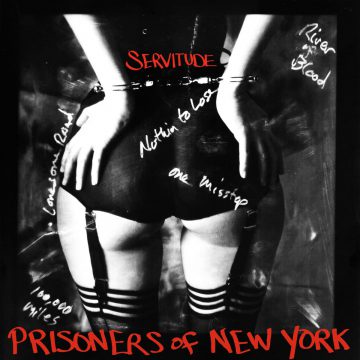 Review:
Coming off like a pipe bomb filled with equal boogie woogie parts Humble Pie, Bad Company, and ’90s rockers Cry of Love packed with a ball of sweaty live energy and hints of ’80s pop sensibilities, Brooklyn, New York bar room rockers Prisoners of New York deliver loosely tight rock and roll topped off with soulfully aggressive vocals. Catchy infectious rock tunes with a low end impossible for backsides to resist and catchy lyrics spit out of a throat as smooth as it is raw. Crazy as it may sound, this power punch of a rock and roll band only just fell into this trip five years ago filling up the tank with three releases and a single along the way all recorded live via the band’s very own mobile recording gear. When I first read that, I was kind of skeptical too. After all, a lot of times when a band says “Yeah, we taped us playing live”, the first response is a painful twitch followed by a half guarded listen. I got to be honest. I had one finger on the button ready to push stop really quick but funny thing is, 30 minutes or so later, I was starting the band’s new release Servitude over from the start again.

I’ll have to admit to being suckered in just a bit with first track “Nothin to Lose” tuggin’ at my power pop rock and roll heart kind of like the Electric Angels tossing out a cool take on Jackson Browne‘s “Boulevard.” While the comparisons pretty much end on the last note of that first tune, I barely had time to pout. Yeah, the rest of the way, the path might be covered more in bluesy bass driven grooves but the bottom line is that Servitude is a raw airy package of well-written rock and roll. If you dig roots-based driving rock and roll bands like Brother Cane, than the low end fat groove with fulla-feel vocals of tunes like “River of Blood” and “100,000 Miles” will pull the bar room nod out of you. If maybe you want to move and groove a little more, “One Misstep” is funk-loaded with heavy white boy soul and some of the best rock vocals this side of Paul Rodgers.

But if like me, that first song got you hankerin’ for at least a little more, “Lonesome Road” throws in just enough mainstream rock and roll on the dial to keep even a serious tune right on the fingertips. I can count on one hand how many great songs are on this one only because they stopped at five, all solid, and perfect for fans of just good ol’ rock and roll. Funny, as I write this, I just also remembered that the band pretty much recorded this (and all their releases) live in one or two of their hometown dives. Heck, I can think of a few bigger bands who have studio records that don’t sound this good!

If you’re looking for some good old school rock and roll to liven up your playlist, you should do yourself a favor and check out the new five track release Servitude by Brooklyn rockers Prisoners of New York. Solid, together, on point, sincere rock and roll meant to be served hot and drenched in a cold bucket of suds for sure. If anything, hit up their Bandcamp page and give ’em a listen first. It’s free to stream so you got nothin’ to lose.

Prisoners of New York live at St Vitus in 2016: