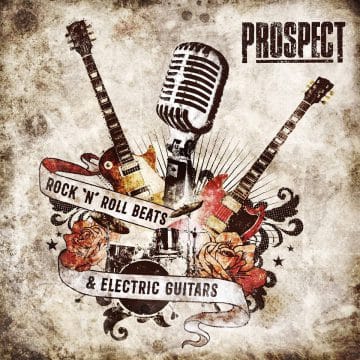 Review:
All killer, no filler. There you go. My review of Prospect’s debut album Rock ‘N’ Roll Beats And Electric Guitars is already done. Funny enough, you could say that my review is even shorter than Prospect‘s rather lengthy album title. Nevertheless, I will expand on my  review of four words simply to set a good example for other Sleaze Roxx contributors. As soon as I heard one song from Prospect (the track “Rock And Shout”), I knew that I had to get whatever they had to offer music wise. That turned out to be the band’s debut album Rock ‘N’ Roll Beats And Electric Guitars, which consists of eight scorching tracks that will remind many of vintage Airbourne or the Black Aces. I ended up contacting Prospect, and purchased a hard copy of their debut record (since I am not a fan of listening to music digitally) which ended up being about $40.00 Cdn when you factor shipping and converting Euros to Canadian dollars. I must confess that I wasn’t thrilled about paying $40.00 Cdn but that didn’t matter at all once I put on the album for a spin because it’s simply a fantastic record from start to finish! Talk about money well spent! I was so excited about Prospect when I heard the song “Rock And Shout” that I ended interviewing some of the band members on the strength of that one song and without hearing any others.

Prospect‘s music is simple and many might say that it’s all been done before but who really cares? Prospect remind me of former Scandinavian band Wolfchild who went by the mantra ‘Real rock is not dead.’ That’s exactly what Prospect convey with their outstanding debut record — solid rock n’ roll at a fast pace along with a lead vocalist (Kenneth Lyng Myrslo) whose voice is like a really sharp razor that can cut through paper sharply and swiftly. Real rock really isn’t dead! There are no weak tracks to speak of on Rock ‘N’ Roll Beats And Electric Guitars. It’s simply balls to the walls rock n’ roll that’s simple and effective. All I can really offer is some slight suggestions to make the songs even better. For instance, on the album opener “Alive”, the chorus is somewhat underwhelming and had it been a tad more bombastic, the song might have turned out to be one of the best on the record. On the last two songs — “Warzone” and “Rock And Shout” — I find that the guitar solos in some sections could have been a little more elaborate and simply better than what is offered. That’s really about it in terms of constructive criticism and it should be noted that these are minor “issues.”

My favorite tracks on Rock And Roll Beats And Electric Guitars are the fast paced “Inmate #666”, the easy to sing along to “Rock And Shout” (“let’s rock and shout”) and “Plug ‘N’ Play” (“rock n’ roll is the only way”) and “Boardingpass To Hell.” I must thank Sleaze Roxx reader Roger Miranda who recommended a number of bands that I wasn’t aware of. Roger recommended Overdrivers whose latest studio album She’s On Her Period finished at #3 on the Sleaze Roxx Readers’ Top 10 Albums of 2018. This time around, Roger recommended a couple of new bands while mentioning that Prospect had the album of the year. I don’t think that Roger is far off in that regard but his other recommendations this year (more on that in upcoming reviews) aren’t quite as good as Overdrivers or Prospect. In any case, Prospect have hit a homerun with their debut record. The great news is that they are currently working on new material so hopefully we will get more of the same from them. Why change a great thing?

I will note that I heard Prospect‘s song “Rock And Shout” before I saw the band’s rather non-rock n’ roll look. In order to distinguish themselves from the pack, the band members like to dress in black with something red like a tie, bowtie or suspenders. All I can say is that looks can be deceiving. Trust me when I say that Prospect have delivered one of the most rocking and best albums of the year!