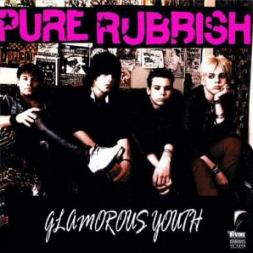 Review:
These guys have it made – if they are great, they are great…and if they suck, people will just say that they live up to their name. Pure Rubbish is essentially a glam/punk band in the same vein as the New York Dolls and more contemporary artists like Jet. As for this album, Glamorous Youth, it was recorded with Guns N’Roses producer Mike Clink, but was shelved in a record company merger after promo copies were released. A four song EP version was released, but the future of this album remains a mystery.

“Kiss Of Death” gets things started off on the right foot, introducing a punk sound with sizzling guitar solos and anarchistic vocals. Like most punk bands the guitar leads can be fairly simple and repetitive, but Pure Rubbish adds enough solos and interesting beats to keep the listener interested. “Parts Unknown” starts off with Poison‘s “Talk Dirty To Me” riff but the similarities end there. “Hey Mr. Taylor” may be unsophisticated, but it works thanks to a great chorus – and is one of the best tunes on Glamorous Youth.

Next up is a cover of the AC/DC classic “Let There Be Rock” and it is done well. The band offers up a high energy version and the different sounding vocals add enough diversity from the original to make this rendition worthwhile. For a young band (when they recorded this) they sure know how to shred, just play “Electric Heart” for proof. The original album ends with “Kings Of Sleaze” (the final five cuts are bonus tracks) which is another cool tune with a great dirty backbone.

Oddly enough Pure Rubbish played on Ozzfest in 2001, yet are nothing like the cookie-cutter crap that normally appears at that festival. Supposedly one of the reasons for not releasing this album was due to the fact that Clink‘s production sounded dated…who thinks up this shit? I suppose it is possible this album would sound dated to people used to hearing computer generated noise with no heart or soul. With decisions like that is it any wonder the major labels are going down the drain? Anyway, head to www.purerubbish.com/www/ and check out Pure Rubbish for yourself.